OPINION|| Ramaphosa Should Now Step Aside According To ANC Rules

By ZIPPSTAR (self media writer) | 2 months ago

As news comes in that Carl Heinous has sued the ANC top 6 for fraud, tax evasion and corruption, it's only fair that those in the top 6 step aside until a judge hands a verdict on their charge, this includes President Cyril Ramaphosa and the other members. 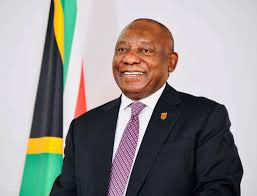 By lying repeatedly under oath in parliament about the Marikana massacre incidents. He should be arrested just like those who instigated or incited the recent unrest. His email resulted in Marikana massacre.

His comments that applauded the vigilante groups to take law into themselves and defend themselves and their properties resulted or escalated the Phoenix massacre.

The these charges against the ANC top six including president Cyril Ramaphosa are enough to have him impeached and prosecuted for breaching llabour laws . The ANC top six should step aside.

Touching. Look at how many times SA cop shot his G. F, after finding her with another man in action

Remember the man who was shot by police? The picture of him and his kids left many traumatized