There's is something unmistakably dreamlike with regards to the call for resistance from Jacob Zuma, the unavoidably delinquent previous president. 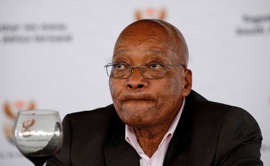 Talking at a memorial service for Nkosazana Dlamini Zuma's sibling in Bulwer on Friday, Zuma approached ANC individuals to "rise and save the ANC".

As indicated by a recording got by the Sunday Times, Zuma said: "In our designs, let us stand up — let us ask … inquiries from the administration, they should come to clarify what turned out badly."

Zuma additionally groaned regarding how the ANC had executed the "move to one side guideline", which hosts underestimated the group of the get-together near him, including Ace Magashule and Carl Niehaus — both of whom host been suspended by the get-together.

The previous president's presentation of war excited the occasionally stranded Carl Niehaus. "You are totally right," Niehaus said, "and we will follow your clarion call that we as ANC individuals should rise and save the ANC."

This fraud will amaze nobody who has seen Zuma trample the country's constitution for over 10 years, destroying establishments of responsibility, introducing awkward comrades at the switches of state power and giving over the keys to the country to the Guptas.

Zuma, all things considered, is the one who managed the ANC's tumble from 66.3% of the vote (in the 2006 civil decisions before he dominated) down to 55.7% in the last metropolitan races, in 2016, preceding he was booted out.

Zuma likewise has the differentiation of being the main ANC president to let completely go more than three metros in a single political decision during that that 2016 defeat — Joburg, Tshwane, and Nelson Mandela Bay.

Do you think Zuma was at all quick to "come to clarify what turned out badly" that time? Do you believe that Zuma, a coursebook narcissist gifted in depicting himself as the casualty, not the culprit, would have upheld the ANC individuals who "ascended" against him after that?

Not briefly. Of course, he accepted daydreams.

In crusading during the 2016 races, Zuma rehashed his mantra that the ANC would administer for eternity. "I hear individuals whining when we say the ANC will govern completely until Jesus returns, yet we have been honored. Ministers have petitioned God for us," he said.

Plainly, he really wanted another minister. Electors, notwithstanding, were honored, when Zuma was thundered out of the office a couple of months after the fact.

Also, express what you like with regards to President Cyril Ramaphosa, he accomplished something Zuma proved unable: Ramaphosa's first political decision saw ANC support really ascend, from 55.7% in the 2016 nearby government races to 57.5% in the 2019 public races.

This isn't to say Ramaphosa's residency has been a triumph. The cold speed of essentially anything — especially financial change — implies SA is still in haziness with scarcely any "new first light" not too far off.

Yet, this is somewhat on the grounds that he revealed the kleptocrats and friends leftover from the Zuma period, deciding to keep them inside the tent rather than booting them out.

Zuma, obviously, shouldn't have been at any memorial service, requiring a revolt. He ought to have been in the slammer, serving the remainder of his 15-month prison sentence for hatred of court.

Just, the man that Ramaphosa named to be remedial administrations chief, Fraser, overruled the body set up unequivocally to think about clinical parole on occasions like this, and delivered Zuma early in light of the fact that he "dreaded distress".

This ought to never have occurred. The clinical parole warning board met in September, and rejected Zuma's application since "his treatment had been advanced and all conditions have been managed".

What's more, doing as such was illicit, contend the DA and Helen Suzman Foundation, since the Correctional Services Act says you can possibly allow clinical parole if a convict is "experiencing a terminal sickness or condition or then again if such a wrongdoer is delivered genuinely debilitated because of injury, infection or ailment".

As Zuma's quality at the burial service last week showed, this is not really the situation. That he's utilizing his ridiculous opportunity to call for resistance is yet more proof of how little respect he has for the constitution he made a solemn vow to secure.

Ramaphosa said he just got to catch wind of Zuma's delivery "when the choice was taken — [Fraser] accepting the choice as he is qualified for … as he is the magistrate".

Just, as the DA contends, Fraser isn't qualified to do that.

Furthermore, presently Ramaphosa is probably going to mourn Zuma's ahistorical call for "responsibility" — something Zuma himself was totally oversensitive to during his ruinous eight years in power.

However, you ought to have expected nothing less. The ANC, harmed and fragmented more by Zuma than any other individual, is presently eating itself.

Rose is proofreader of the FM