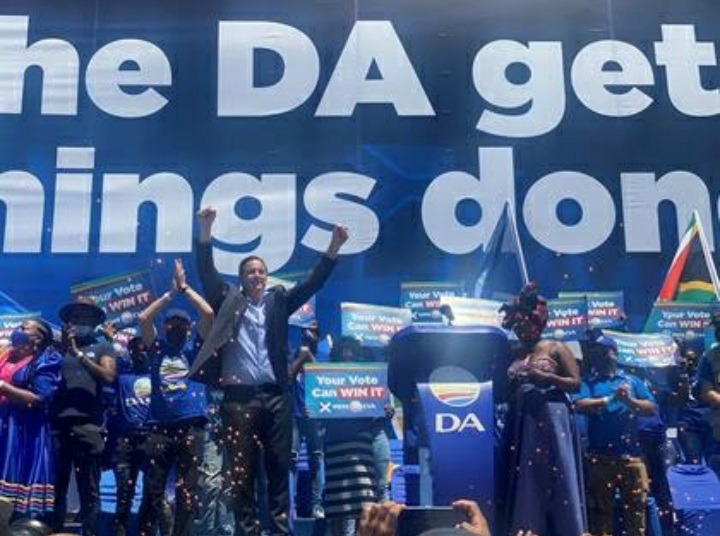 In a final push ahead of the municipal elections, DA leader John Steenhuisen begged citizens to vote with their heads - not their emotions.

The DA hosted its final rally on Saturday at Mary Fitzgerald Square in Johannesburg.

Steenhuisen, who was joined by the party's mayoral competitors, was invited by noisy cheers from many allies.

At the point when he took the platform, he said citizens needed to oppose the passionate allure of battle accreditations from the ANC. All things being equal, individuals should take a gander at their towns, urban areas and networks and find out if the ANC merits their help.

"Disregard briefly pretty much all the passionate requests from parties who will ask for your dependability in light of the fact that once, quite a while in the past, they assumed a part in the freedom battle," he said.

DA John Steenhuisen at the DA's last assembly on Saturday. He spoke to residents to pick the DA over other ideological groups.

He was incredulous of more modest ideological groups, and named the EFF explicitly, saying that it was not worth supporting since it came up short on the numbers.

Free applicants were likewise not saved. Steenhuisen blamed them for not representing any qualities.

"Vote brilliant. Vote with your head," he asked individuals.

The DA chief additionally endeavored to attack the ANC's administration record in different districts, saying that every one of the useless regions made them thing in like manner - they were represented by the ANC.

The DA's record, in any case, justified itself on the grounds that the Auditor-General and Statistics South Africa recorded that the best-run regions were DA-run regions, he said.

He utilized News24's Out of Order Index, which tracks the presentation of districts the nation over, as proof that in excess of 100 regions in the nation had fizzled.

"The characteristic of the ANC sits like fingerprints on a crime location across each and every bombed town and city. Individually, they have broken these regions and afterward left inhabitants there to get the pieces," he said.

In any case, rankings showed that the DA was the main party able to do "finishing things", he said.

He let citizens know that assuming they needed what DA-run regions had, they would have to back the party on 1 November.

He discussed the DA's arrangements to carry out autonomously acquired power to DA-run metros.

Furthermore, the party planned to keep battling for decentralized policing.

"Gives us five hindered and positive years to balance out the accounts, to clear out the defilement and to get administration conveyance in the groove again," he said.