By HomeAway (self media writer) | 7 months ago

There is uproar over a kombi used by one of the MP candidates to campaign for a parliamentary seat at LaMgabhi Inkhundla. As a result, the Elections and Boundaries Commission (EBC) had to halt the campaign meeting scheduled for Nhlulweni Umphakatsi yesterday. This publication gathered that four candidates were not happy with their fellow candidate from LaMgabhi Chiefdom.

As a result, they were unwilling to campaign during yesterday’s event. Last week, this publication reported that Dumisani Dlamini had donated the kombi to LaMgabhi Inkhundla to be used by residents. This was during the campaign meeting at LaMgabhi Umphakatsi on Saturday last week.

This publication also gathered that Dlamini was warned by the EBC not to brand the kombi with the LaMgabhi Inkhundla tag. However, Dlamini is alleged to have proceeded with the kombi to Ka-Luhleko Umphakatsi on the following day to use it in his campaign strategy. Such has not been received well by Dlamini’s competitors. 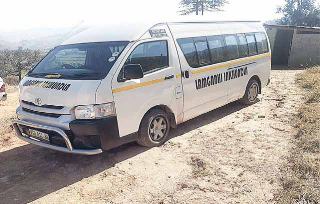 Speaking to this publication, the other candidates expressed disgruntlement on what they viewed as an unfair practice by Dlamini. They stated that Dlamini branded his kombi using the name of the inkhundla, something that was not fair to them, as his competitors. They felt the inkhundla belonged to every one of them and Dlamini was not supposed to abuse its name for his own benefit.

The candidates also stated that Dlamini was warned by the EBC last week at LaMgabhi, but was somehow allowed to use it the following day in his campaign. “We were patient enough and allowed this to happen, thinking that the EBC will cooperate with us on this matter by preventing him from doing this again,” they said.

Dlamini’s competitors further said they could not take it anymore when they saw Dlamini’s kombi at Nhlulweni, hence they decided not to be part of the campaign meeting. “We are now campaigning for the third time at Nhlulweni, after LaMgabhi and Ka-Luhleko and nothing is being done about this issue. We cannot tolerate it,” they said.

They further said as far as they were concerned, Dlamini had violated the elections code of conduct. They wanted to see the law taking its course before they could continue with the campaigns. Otherwise, they would let Dlamini campaign alone because it was clear that they were merely chasing his shadows.

They further said Dlamini used material things to run his campaigns, something that was against the code of conduct. They said T-shirts and stickers were allowed, but property like kombis were not. What was allowed was for the candidate to place his or her sticker on a vehicle or any material. They also stated that it was not proper for a candidate to promise materialistic things for the residents.

They said Dlamini promised to buy chairs for the inkhundla and also seeds and manure for imiphakatsi under LaMgabhi Inkhundla. They said such things were not proper. They said LaMgabhi elections were marred by unfairness. They said during the primary elections at the beginning of this month, there was unfairness noted and the EBC promised to attend to the matter. T

hey said fortunately, some of the people involved lost the elections. Approached Dlamini, when approached on the matter, asked not to comment. He said he was yet to have a meeting with the EBC on the same issue. He would then issue a statement stating his side of the story.

They said campaigns were done using money and Dlamini showed by his actions that he was hungrier for the parliamentary seat for LaMgabhi Inkhundla. However, some of the attendants of the meeting had different views to Dlamini’s supporters. They stated that Dlamini was doing this to fool the residents into believing that he would do something beneficial for the residents of LaMgabhi Inkhundla once in parliament.

“We have seen aspiring MPs splashing money and other materials to canvass for votes, only for them to vanish into thin air once elected. This is not good campaigning because it’s being dishonest to the people,” they said. They were of the view that the four candidates did a good thing by raising such concerns.

EBC Communications Officer Mbonisi Bhembe said he was not in a position to comment on the issue because he was still waiting for a briefing from his colleagues who were on the ground. He said after they were informed of what really transpired, the EBC would then give them a way forward. Emphasised Bhembe emphasised that the EBC strived to ensure fairness to everyone taking part in the elections.

He said the EBC encouraged candidates to speak to the people when campaigning. “Whenever you have another way of campaigning in mind, it is important to consult with the EBC to find out if it is acceptable or not,” Bhembe said.

The EBC mouthpiece stated that in the past, vulnerable groups such as women and the youth complained that they did not have a fair ground to compete in the elections. This was because those they competed with would have it easy because they had the resources, making them have landslide victories over the disadvantaged people.

Two Witches Caught Doing This In The Kitchen. Details