By _Heavenly (self media writer) | 4 months ago 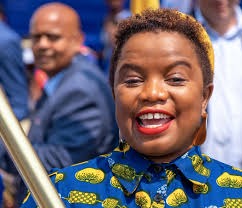 Former Member of Parliament (MP) Phumzile Van Damme said she represented a Democratic Alliance (DA) that was a little bit more progressive and in touch with South Africa.

"It became a bit of a cult" - these are the words of former DA MP, who lifted the lid on her final few months in the party.

While speaking on 702, Van Damme claimed that the party became like a "mini Donald Trump party" that spoke to FFP type of voters.

"John and I had a good relationship. I reckon he was under a lot of pressure from people who dislike me in the DA, because I kind of represented a DA that was a little bit more progressive and more in touch with SA, and wanted the DA to speak about race". Van Damme said.

"The DA changed when he [John Steenhuisen] was elected. It became a bit of a cult. It was like you are not 100% obedient, you'd be bullied, terrorized and sidelined". She added.

Van Damme also explained that she and former DA leader who is the party's federal council chairperson Helen Zille have no beef, despite their public squabbles.

Content created and supplied by: _Heavenly (via Opera News )

EFF FUMES as Officers who are helping Hillary's accused murderers behind the doors are EXPOSED. See

Bheki Cele Finally reacts to Namhla's murder case. Look at what he is planning to do tomorrow