By MediagistPlan (self media writer) | 2 years ago 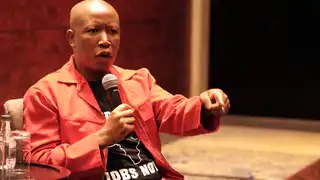 Its high time Julius Malema clear the air about him being implicated on the VBS bank looting. Julius Malema the EFF leader will be holding an interview with some journalists soon. As reported he insists on clearing his name, he wants to respond to questions about the party alleged involvement and himself in the VBS Mutual Bank saga. So on Wednesday he revealed that he has already invited five journalists from different house media.

According to him the round table will be held noon. Follow South Africa Reserve Bank, this whole looting started in the year 2018, it was first noticed then by the SA Reserve Bank.

The R2 billion that was allegedly looted form the bank with the help of many executives. This report then was titled "The Great Bank Heist" that was revealed in October 2018 by the investigator Terry Motau.

"VBS Bank was formed to be a savings facility in 1982 and saw many individuals channel their savings to the bank. This included pensioners who had their lifesaving disappear after news of the looting came to light". It was reported that over billions of rands was invested in the bank by a sum of twenty municipalities all over and across the country, and only few funds where able to be recovered.

According to report over R1 billion reported stolen which all the looted funds where looted to different bank account with various politicians who benefited from it, who where regarded as the EFF and ANC being accused of corruptly benefiting from the VBS bank looting.

Seven men was confirmed to be arrested in connection with the bank looting. This was confirmed by the Hawks and NPA last week. The Hawks head Lieutenant General Godfrey Lebeya, reported that Hawks conducted raids on June 17 on 10 properties in Gauteng and Limpopo, where the Seven men were arested including the former VBS executives.

Last week they appeared at the Palm Ridge Magistrate's Court on thursday and the case was postponed until October. These men that was allegedly arrested were reportedly accused of other Fourty Seven charges which are: five charges of racketeering, 12 counts of theft, 15 charges for corruption, 7 charges of fraud and 7 for money laundering. It has been said that the suspects names will be revealed when they appear in court.

It has also been reported that the EFF being accused of benefiting financially from the funds stolen at VBS.

But yet Lebeya have refused to respond to the questions about Floyd Shivambu deputy president of EFF, whose brother had been linked to a company that received funds from VBS Bank.