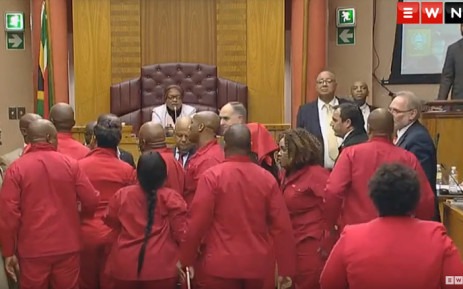 CAPE TOWN - Sixteen individuals from the Economic Freedom Fighters (EFF) are to be rebuffed for raging the platform where Public Enterprises Minister Pravin Gordhan was attempting to convey a Budget Speech.

The occurrence occurred in July 2019. Resistance legislators raced to shield Gordhan from the propelling red berets, who were subsequently taken out from the chamber.

Parliament's powers and advantages panel viewed the EFF MPs to be blameworthy of being in disdain of Parliament, a genuine allegation.

The advisory group's report and suggested activity against the EFF MPs were predominantly upheld in the National Assembly on Tuesday with 274 votes in favor and only 35 against.

Two EFF MPs, Sam Mathiase and Primrose Sonti, are to be suspended from Parliament without pay for 30 days as the panel observed they were habitual perpetrators.

Fourteen other EFF individuals from the National Assembly are to have 30 days' compensation and recompenses docked after additionally being found in scorn of Parliament.

The Democratic Alliance's Natasha Mazzone was made to pull out the words "extremist" and hooligans" while depicting the EFF's conduct during the uncommon interruption of Gordhan's spending plan discourse more than two years prior.

The EFF's Mbuyiseni Ndlozi portrayed the panel's procedures, which the party boycotted, as a "fake court". EFF boss whip Floyd Shivambu told the House the party would take the council's report on legal audit.