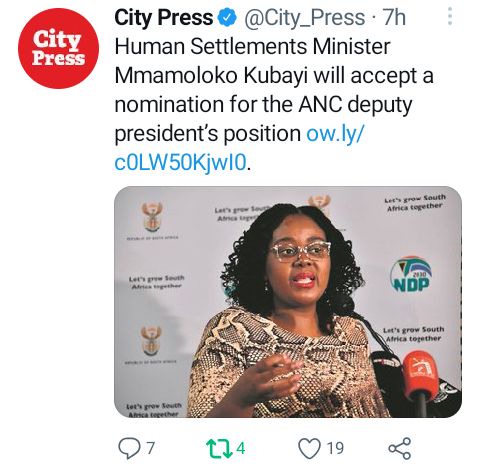 Mmamoloko Kubayi, the current Minister of Human Settlements, has agreed to accept a nomination for the position of ANC vice president.

No branch has officially nominated Kubayi for the role, she revealed yesterday at a Women's Day event hosted by her branch, Moloto Tambane, in Protea South, Soweto.

Nonetheless, the department has publicly endorsed her for one of the top six posts. She's in the running for the part alongside Ronald Lamola and Paul Mashatile.

The first person to publicly support Kubayi for vice president was Pinkie Numa, who works for the Young Women's Desk of the ANC Women's League in greater Johannesburg.

The mood of the national conference is established at the KZN assembly.

As the ladies cheered and ululated, Numa declared, "We are unequivocally expressing that comrade Nkhensani [also known as Kubayi] should represent us in the top six."

Chief of Staff Ester Maema of Ward 14 claimed that Kubayi, whom she referred to as a "child of Protea" and a "child of Soweto," had the support of the branch.

Afterwards, Kubayi gave an interview to the media in which she said that her branch had informed her that her nomination would be endorsed following a branch meeting. Several people had approached her for assistance, she added, and she had sent them to her branch and zone (zone 4).

My backers have an obligation to ensure that I am put forward as a candidate. Until I fulfill the necessary condition, my expression of availability is meaningless. Most importantly, we require the help of 4,000 locations.

Being a lifelong member of the ANC and a dedicated member of its ranks, I see no reason to refuse this nomination. No organization has formally nominated me at this moment, but [when the time comes] I will gladly take the position. My department has to publicly announce that it will be the one to start the process.

Kubayi pointed out that the "majority of men" in the ANC questioned why Nkosazana Dlamini-Zuma did not run for vice president when she received widespread support for the presidency at the 2017 Nasrec conference. Therefore, it would be unfair if they tried to prevent a woman from being hired for the same position.

We think we can compete, and if we can't, we'll deal with it. The ANC needs a woman in the vice presidency position, thus I don't mind if Nkhensani gets the job. These principles serve as the basis. Women should hold at least half of the ANC's top six posts, she said; otherwise, the party will fail to meet its goals.

In her speech to the packed Protea South Community Hall, she had made the same point. 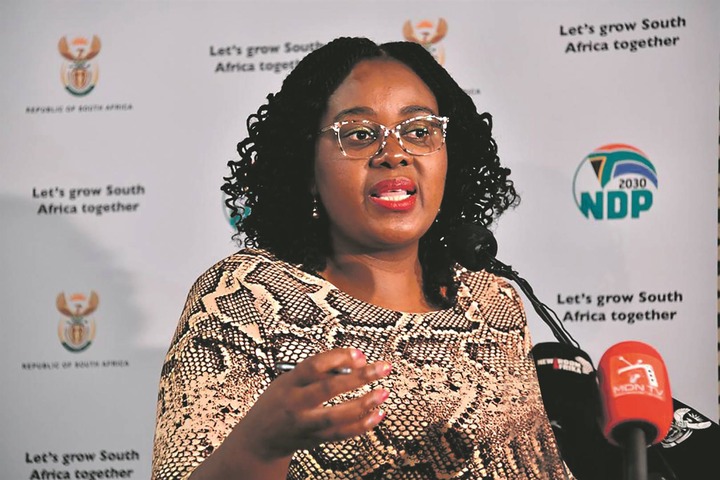 Those who claim to support me as a vice presidential candidate will have to crisscross the country in order to win over branches and convince them that I am the person they want to support as a branch. My branch has decided to canvass and support me, and so have zones 4 and 10 in Soweto.

In her speech, Kubayi claimed that the ANC had taken a step backwards because only one woman had been elected at the previous conference: the late Jessie Duarte. "She left, and we no longer have a woman in the top six," she said.

She also said that females should reflect on their part in advancing gender parity.

When all was said and done, were we successful? It is our responsibility as women to work toward ending discrimination based on gender. We need to make it clear that sexism is a thing of the past and that the fight for female equality starts with the African National Congress (ANC).

The Lady snatched from her Audi this week and the kidnappers demands this amount from her Husband.

A Spaza shop owned by Bangladeshi nationals got bust in Gauteng, this is what police found