Carl Niehaus Says He is already putting finishing touches to his appeal against the ANC for his Dismissal. Recall that the MKMVA veteran described his suspension as a Draconian act, saying that he will continue to fight on. The RET ANC member and loyalist of former president Jacob Zuma was also suspended from the ruling party as they accused him of gross anti-party activities. Today he wrote, “Putting the finishing touches to the appeal against my illegal dismissal, for submission tomorrow. It is a comprehensive, & legally sound document, showing how all my rights & labour law have been flouted by arrogant @MYANC managers. As I've said, I will fight this to the hilt”. The MKMVA veteran said that he will never give up until he gets good justice, saying that his dismissal was politically initiated. 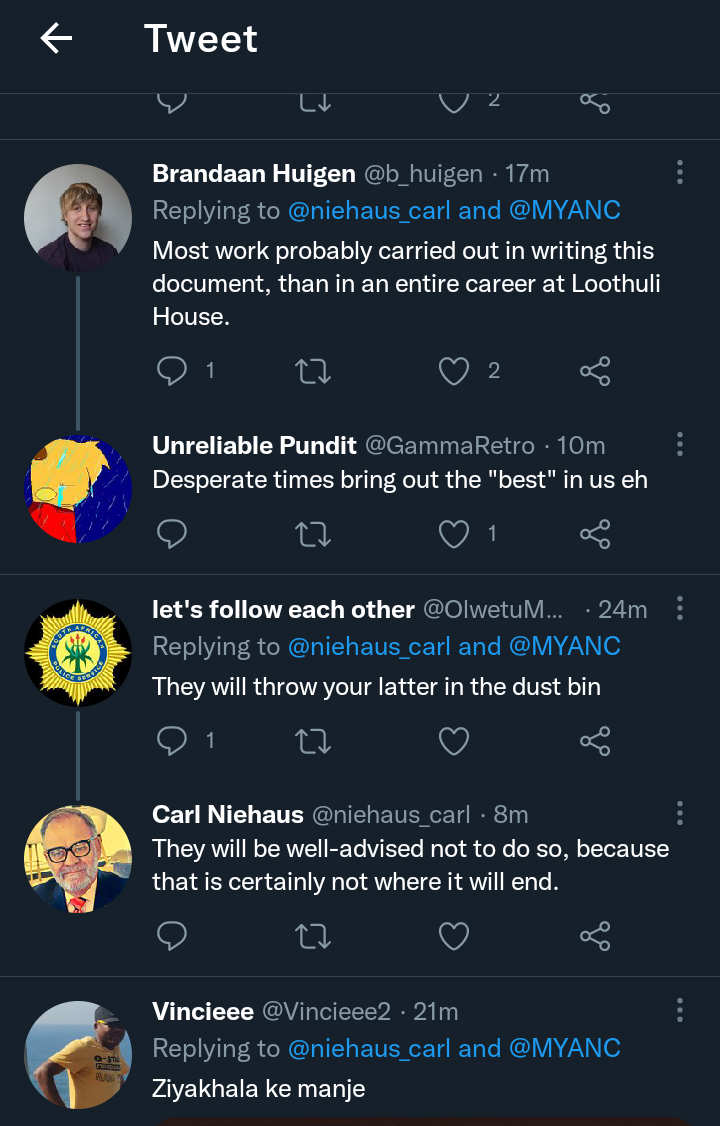 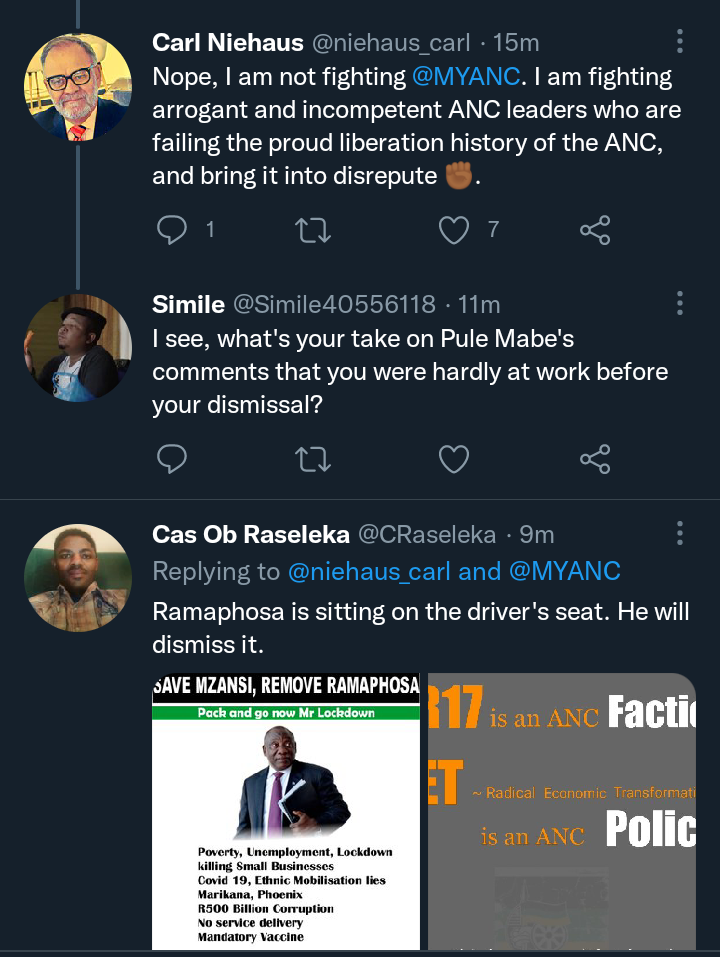 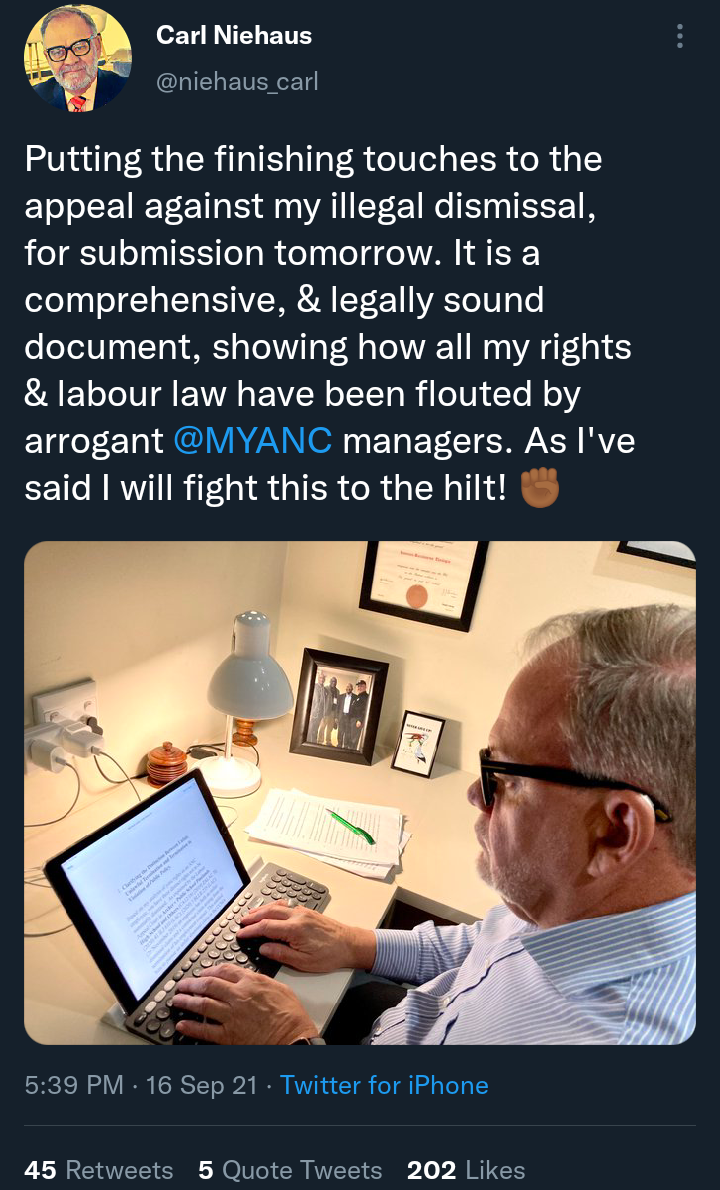 Carl Niehaus made it known that he is not fighting against the government as some people are insinuating, rather, he is fighting the ANC and on just course. He wrote, “Nope, I am not fighting @MYANC. I am fighting arrogant and incompetent ANC leaders who are failing the proud liberation history of the ANC, and bring it into disrepute. I do not report to @pulemabe, he just rants and raves, he knows zilch". This was his interaction with a Twitter user who is asking why he is fighting against the ANC. It is widely believed among the ordinary people that Carl Niehaus is being attacked or persecuted because of his close affiliation to ex-president, Jacob Zuma. In fact, most of the RET ANC members who are associated with Jacob Zuma are also facing similar challenges in the ANC, having several court cases and also facing various levels of suspension in the ruling party. The infighting among the ANC have been intimated to be the root of the ANC travails as they battle other political parties in the upcoming local government elections. 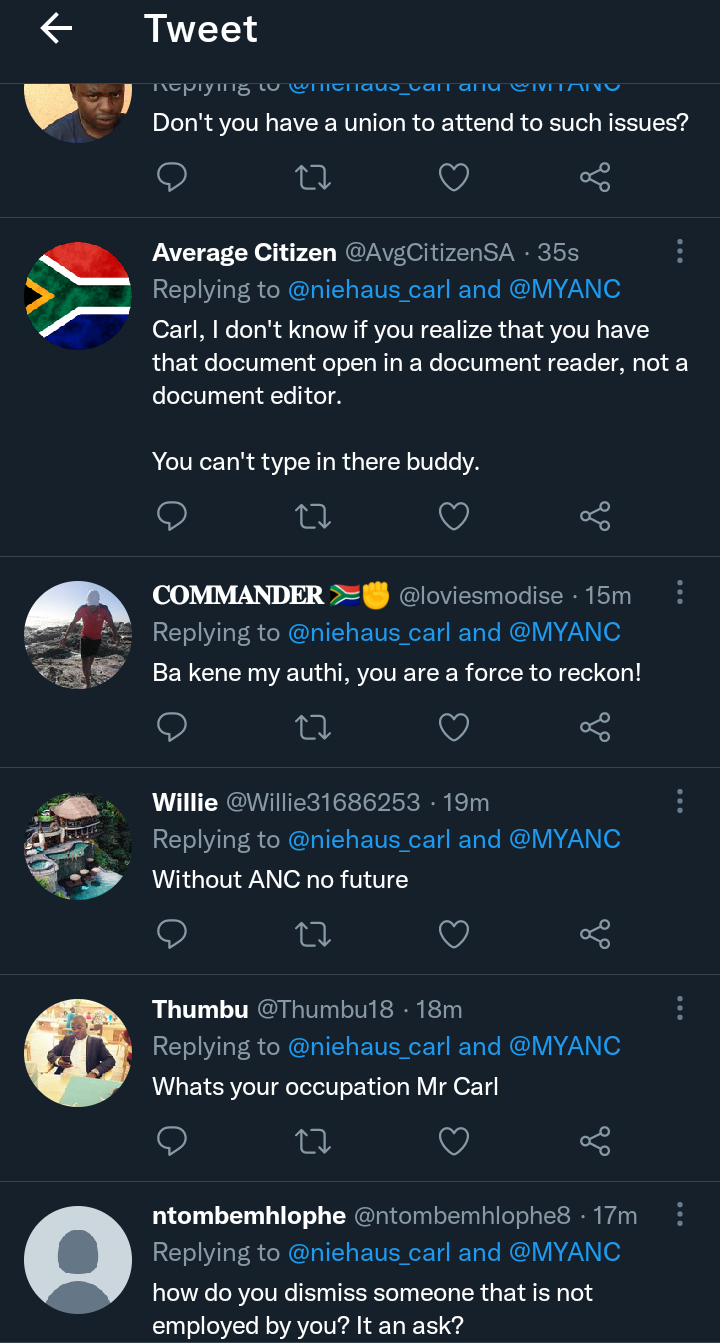 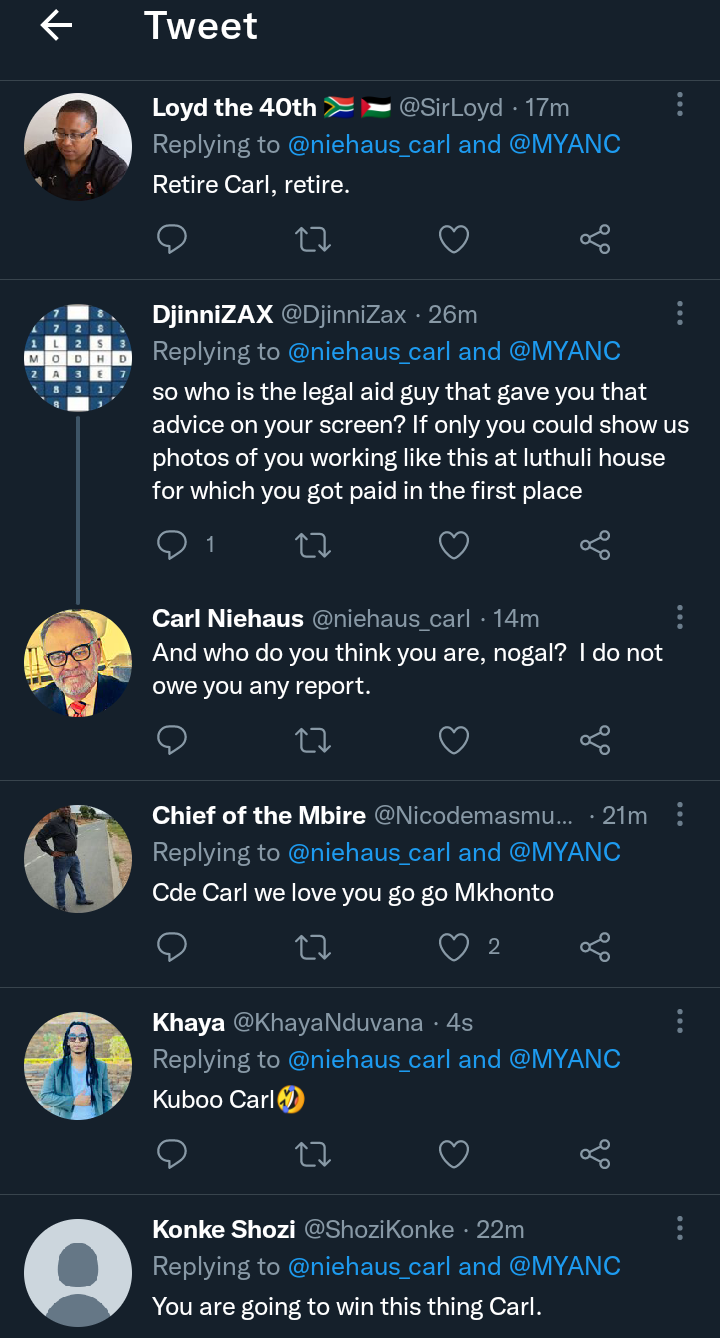 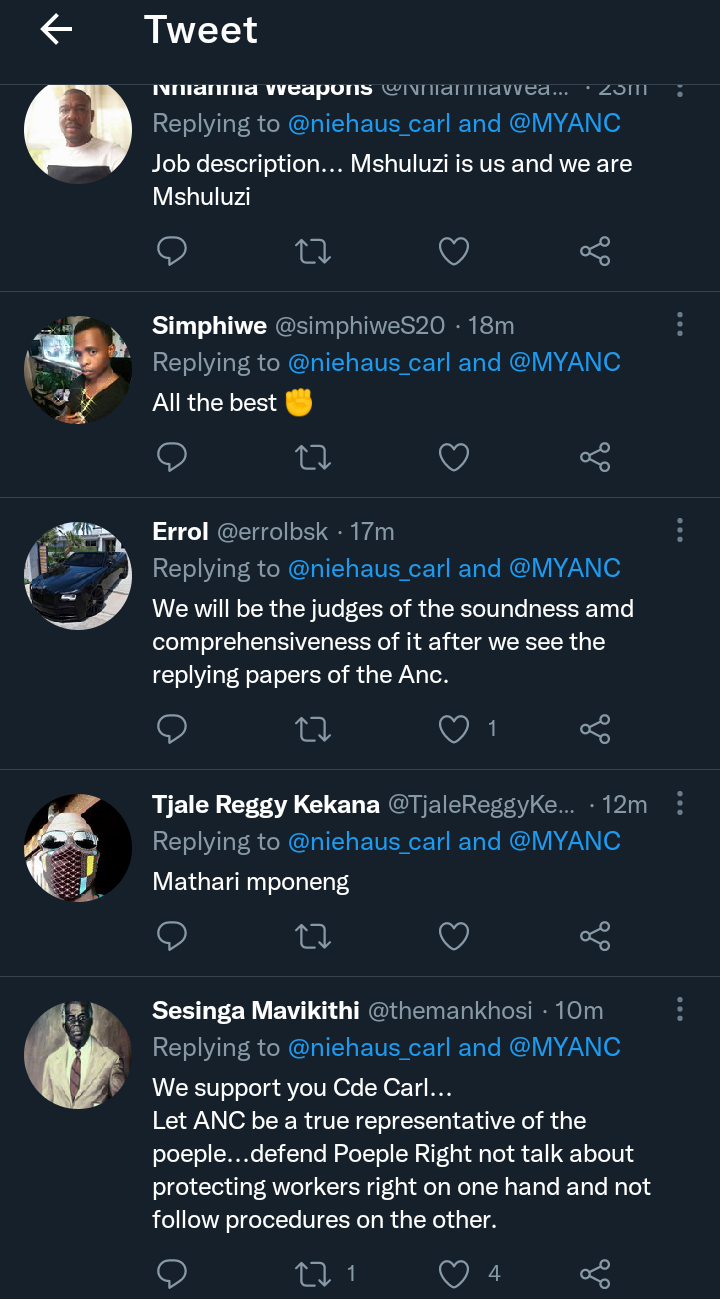 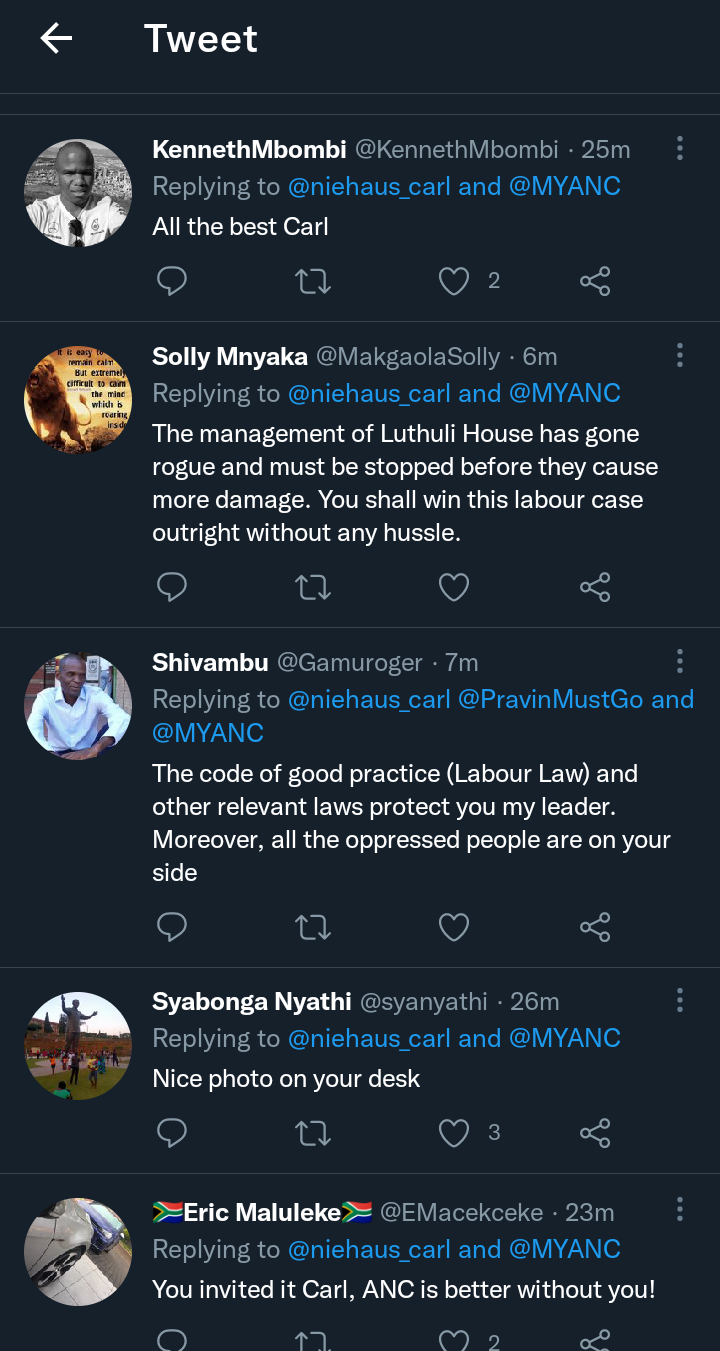 Some people are asking Carl Niehaus why he want to go back to the ANC he once described as incompetent people. The lady asked, “So what do you want from the incompetent people, do you still remember when you lied to my ANC about your mother passing away? Do you have a valid contract as an employee of ANC? What were your duties?

Reporting to whom? Did you finish your tasking daily?

Who signed your employment contract? You are emotional, ANC must expel you because you add no value in ANC. If l was apartheid security officer, l would have bliksem you goed".

Sad news -SA is morning the loss of a legend