Reasons why millions of Zimbabweans are in South Africa today

By Makk (self media writer) | 8 months ago 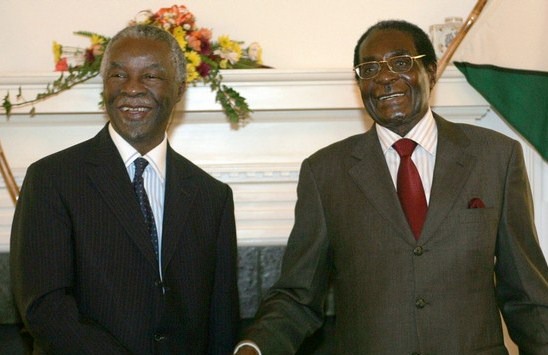 During the time of President Mbeki’s rule The South African ‘ANC’ government foreign policies were evil and hostile to Zimbabweans.

The ANC government supported Mugabe’s government destruction of farms and companies in Zimbabwe.

Mbeki was very unpatriotic to both Zimbabwe and South Africa.

Millions of Zimbabweans wouldn’t have fled the country for South Africa.

I blame Thabo Mbeki. He should have discarded the mentality of supporting a fellow liberation party that was destroying the country and livehoods.

Many times Britain wanted to invade Zimbabwe during Mugabe’s rule but Mbeki was stopping them. Actually Mbeki was perverse and contributed a lot to deaths of Zimbabweans. He actually wanted Zimbabwe to be destroyed. So that South Africa could benefit from it.

Killing and chasing away people is not going to help. Even illigal Zimbabweans and Nigerians will continue staying in South Africa. It’s not a problem that will be solved by deportation trains or buses or by xenophobia.

On humanitarian grounds South Africa must assist Nigerian, Zimbabwean and Mozambiquen immigrants. The UN must donate a lot of money to South Africa.

Violent removal of Zimbabweans from South Africa will in actually fact further destroy the country. Killing people in streets is desperation and evil and will backfire. This will make God more angry and worsen the situation of South Africa.

“When immigrants live in your land with you, you must not cheat them. Any immigrant who lives with you must be treated as if they were one of your citizens. You must love them as yourself, because you were immigrants in the land of Egypt; I am the Lord your God.” —(Common English Bible)

“The Lord proclaims: Do what is just and right; rescue the oppressed from the power of the oppressor. Don’t exploit or mistreat the refugee, the orphan, and the widow. Don’t spill the blood of the innocent in this place.” —(Common English Bible)

IMF and World bank must not isolate Zimbabwe. We are sick and tired of your communist double standards. If you are fair now put Australia on sanctions for massive human rights abuses over Covid-19 mandates.

Both black and white and South Africans of all colours you have been so good to Zimbabweans. Please keep it up you have been so human. We really need such unity and Humanity to advance as Africa.

We need to fight these political diseases together. Our common enemy is corruption, selfishness and greediness.

Content created and supplied by: Makk (via Opera News )