Tito Mboweni wants this to end 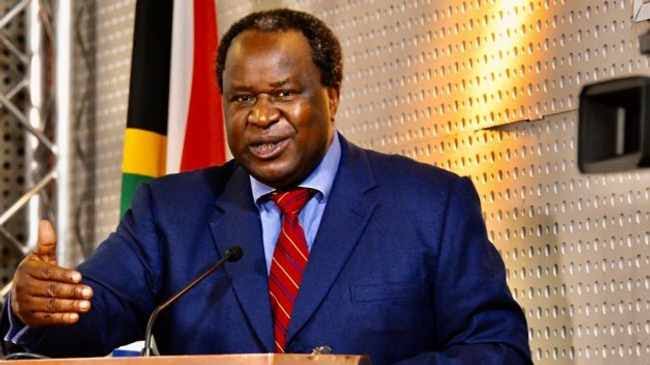 Former Reserve bank governor and finance minister, Tito Mboweni has called for the end to the practice of women bringing hand washing dishes to people while on their knees. "Should we continue this cultural approach? Does not look right. I submit".

Tito is also known, particularly on Twitter for his love for homemade cooking including cooking his favourite food, Pilchards. His dishes don't really look good but that does not stop him.

Tito's desire to end the practice is misguided. Most women love to cater to their men. They are not forced. They love to make the man feel special as the head of the house and the provider. Despite what men say they also need assurance from time to time. Especially because this world does not care for black men, particularly when they are poor.

Others use it as a form of respect for their guests. It's a way to show love and that the guest is welcome (Remember that this practice is not isolated to husband and wife).There is nothing abusive about showing people love and respect.

It's really strange that an old black man like Tito can feel like this. A man who grew up in villages should know the importance of traditions and cultures. In fact, he should be an advocate for remaining true to your roots.

Tito is however not a traditionalist. He calls himself the Duke of the Duchy of Magoebaskloof. A duke is a European nobility title and it's the highest rank in the nobility. He also once celebrated an interracial marriage on twitter and called it the wedding of South Africa's dreams.

"This wedding has given me hope. Breaking the artificial racial borders. Kings Walden. Agatha, Tzaneen. Slowly building the South Africa of our dreams! Google them".

Tito was met with criticism for this tweet but did not retract.

It appears Tito's love for race mixing and progression means that black people need to sacrifice their culture and traditions for white western culture. I will not be surprised if he says that Lobola should be cancelled, or the cancellation of the exchange of gifts. Either way he is misguided.