By TsepoNews (self media writer) | 3 months ago 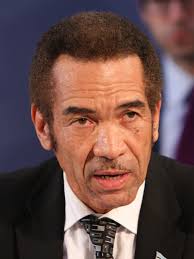 The former president of Botswana Ian khama has accused the Botswana state security of detaining his twin Brothers.

According to the information he provided he also added that the Botswana state security is currently going after his brother's wife.

Months ago it was reported that Ian khama had fled to South Africa to seek refugee however it was difficult for him to get any Asylum papers because officers were currently closed. Currently it is not known if he is still in South Africa or if he returned to Botswana.

However he has publicly stated that he is currently being persecuted and that his life together with that of his brothers and their families are in danger.

When he fled to South Africa he claims that the Botswana state security was trying to get him jailed. This was after he was accused of having stolen same government equipment.

Watch: Woman Collapses After Boyfriend Proposed To Her.