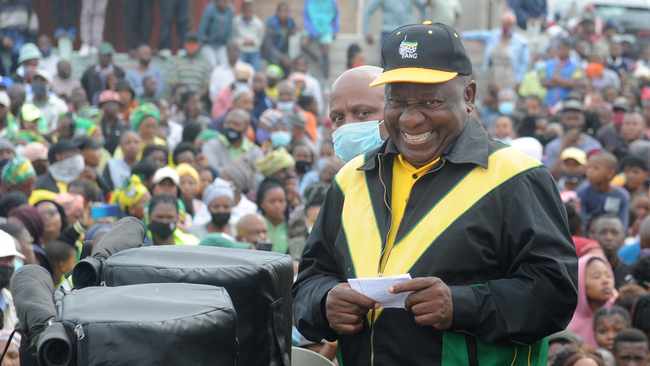 Ramaphosa advises Khayelitsha inhabitants to cast a ballot ANC or the city will be controlled by the people who couldn't care less...

PRESIDENT Cyril Ramaphosa asked the local area of Greenpoint, in Khayelitsha, to come in huge numbers to decide in favor of the ANC on November 1.

"We say, as the ANC, we need you to turn out in numbers to decide on November 1. You should come out, every one of you," Ramaphosa told the large numbers accumulated at an open space, close to the casual settlement Qandu-Qandu.

"On the off chance that you don't come in numbers, the (City of Cape Town) district will be in the possession of individuals who couldn't care less with regards to you, who do nothing for you, and who don't see you as meriting administration conveyance," he said.

His location to the local area followed one more in Mfuleni prior, where he offered comparable expressions and noticed that the ANC once administered the city of Cape Town, just to lose to the DA.

In what could be deciphered as faulting the electorate for not casting a ballot the ANC in the past races, Ramaphosa said when the City of Cape Town was represented by the ANC, there was conveyance of administrations – from houses, to streets, among others.

"You didn't come en masse and the DA came in. Upon its appearance, it showed you what it is. We can see it," he said.

He was alluding to helpless assistance conveyance in Khayelitsha, where sewage was spilling over in the roads, and obstructed downpours and potholes were the thing to take care of.

Ramaphosa underlined the significance of the local area turning out in numbers to decide on final voting day, and not simply expecting that the ANC would win.

"We say, assuming you need change here – it is an absolute necessity – and you should turn out on a huge scale. In the event that you don't, things will continue as before," he added.

Toward the beginning of his location, there was a gathering in the group that held bulletins up high.

A portion of the bulletins were griping about the dismissal of uses for the R350 unique award, requesting acknowledgment of local area medical services laborers, and interest for lodging improvement.

"I ask those with bulletins – I have seen the notices – put them down. I have perused them appropriately. Put them down, every one of them," he said.

Rather than agreeing with his solicitation, more notices were held on high.

"Put down the bulletins. Much thanks to you," Ramaphosa said before he then, at that point, presented a few councilors from Khayelitsha.

Before Ramaphosa's landing in Greenpoint, one ANC pioneer had advised the notice employing swarm against their activity.

In an obvious prompting against the media, the ANC pioneer even blamed the media for being complicit in the quiet dissent by the bulletin using individuals.

"We won't acknowledge the media to fan, misshape and occupy our convention. In the event that individuals have bulletins, they raise them – not in an unobtrusive manner – to campaign others," he said as some quiet nonconformists were being met.