By Coleman (self media writer) | 29 days ago

The EFF has denounced an episode in Dambuza, KwaZulu-Natal, where what gives off an impression of being ANC individuals endeavored to bar the head of the Red Berets from assessing a democratic station.

The party requested that the Independent Electoral Commission make a move against the ANC for their individuals' conduct.

Scores of individuals clad in ANC formal attire amassed the middle's doors not long before 14:00 on Sunday evening, and attempted to threaten Julius Malema during his visit to the space outside Pietermaritzburg. The EFF pioneer visited the region as a component of the party's political race battling. 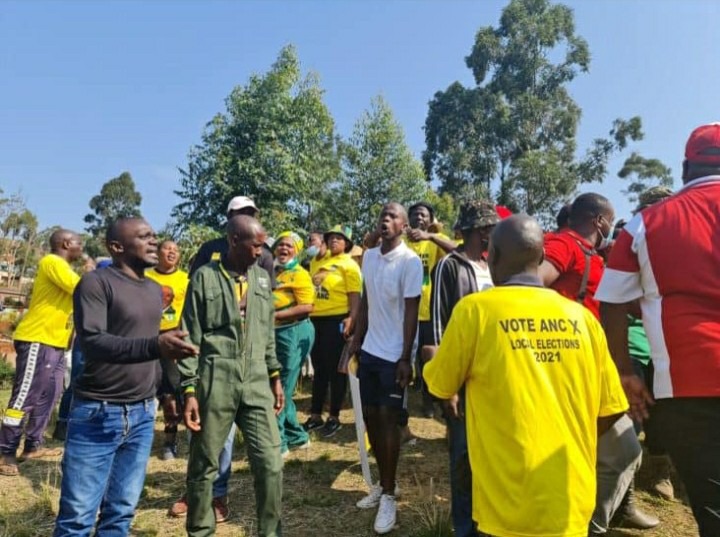 In recordings posted via online media, it is clear local people were not very satisfied with his quality, and the ANC allies and their EFF partners almost got into a fight.

Malema didn't withdraw however, and proceeded with his visit, demanding that the ANC won't be permitted to transform any piece of the country into an off limits region. He additionally denied claims that EFF individuals were illicitly eliminating ANC banners to supplant them with their own, saying the ANC doesn't have any banners to eliminate. 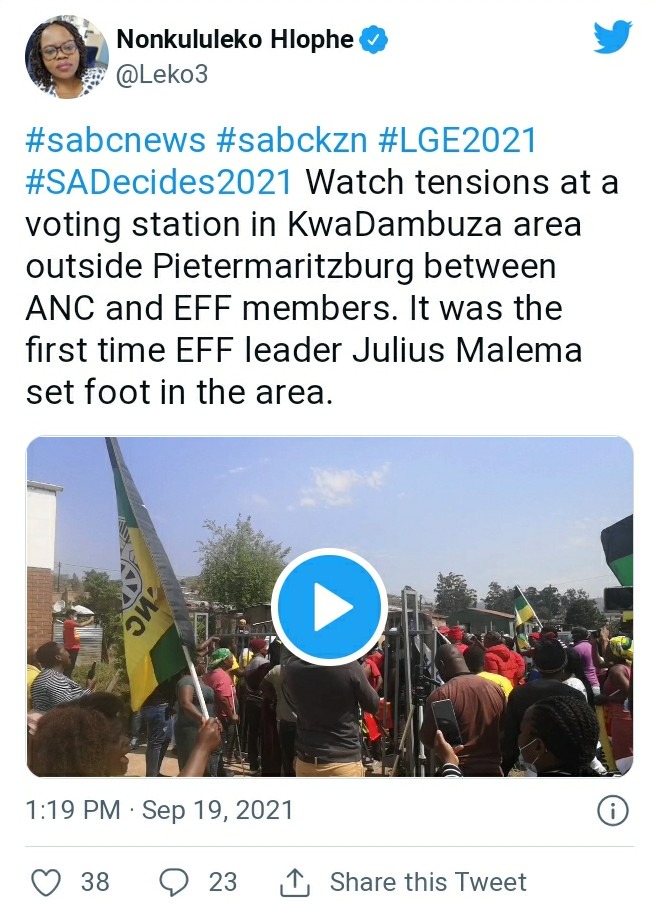 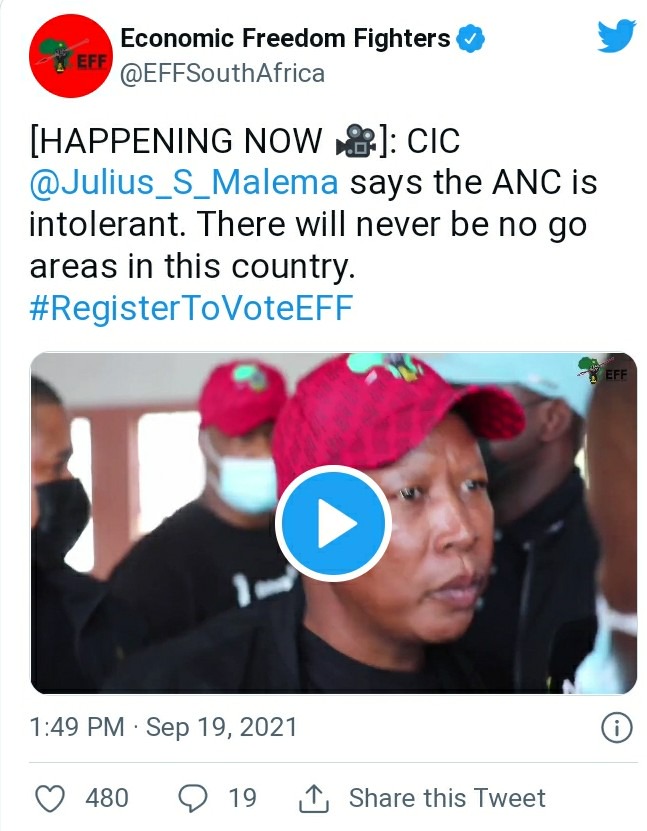 The EFF said in an explanation that the occurrence of "clear urgency" from the ANC.

"In clear franticness, and seeing that their political force is getting ceaselessly, the lawbreakers and boozers of the withering decision party dispatched an assault on EFF individuals, additionally striping (sic) away EFF gazebos, and assaulting our individuals who were practicing their popularity based right to ask South Africans to enroll to cast a ballot.

"The EFF need to make obviously there are no "off limits regions" where the EFF can battle and no measure of tanked, and misconduct by silly people will stop us or keep us from crusading." 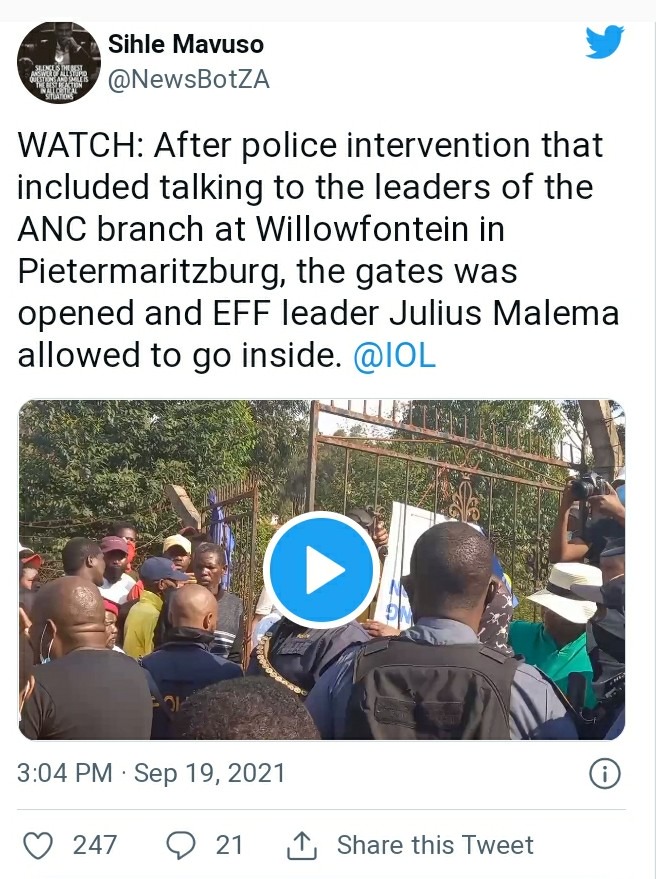 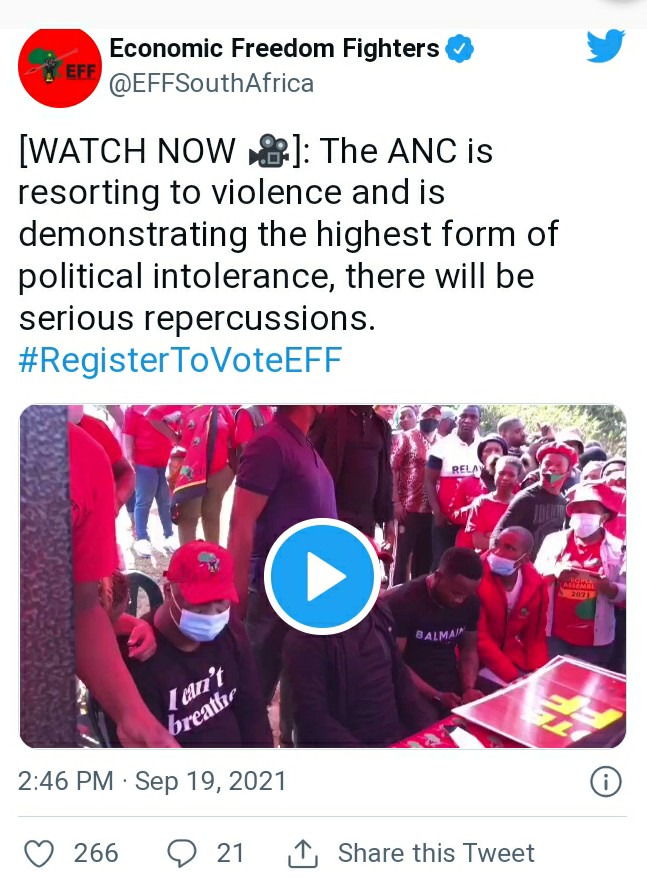 In the interim, the DA has likewise called for activity following evident brutal fights in the Eastern Cape's Nyandeni Municipality, by ANC individuals who are discontent with the party's possibility for the forthcoming decisions.

Two democratic stations in the space were clearly shut somewhere around the protestors on Saturday, and it is hazy whether they were permitted to return on Sunday.

In an assertion, the DA said the ANC is "showing outright scorn for individuals of our nation by denying would-be electors their protected right, to enroll with the end goal for them to have the option to cast a ballot in the races on 1 November 2021"

"This is an attack on our majority rule government and can't be acknowledged," the assertion read.

"The DA will screen the circumstance to guarantee that the inhabitants of the Nyandeni Municipality, are not denied their established right to enlist and to decide on final voting day."