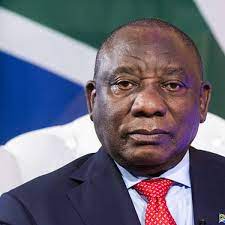 On Tuesday, Malema held a press preparation at the party's base camp in Johannesburg to address issues encompassing alliance arrangements with various ideological groups when he offered the comments.

"We in a real sense have a debilitated government in light of advanced age," said Malema who initially singled out Public Enterprises Minister Pravin Gordhan.

"I don't know folks, and this I am talking under remedy, yet it seems as though Pravin is wiped out, and he can't play out his obligation.

"Notwithstanding his inadequacy personally, his wellbeing isn't in acceptable condition. So you have a debilitated emergency like this with an appropriate and fit priest's to run a particularly intricate service.

"It's a damage to a country. Indeed, even himself, he is so eager to where he can't tell the president: 'discharge me'."

"It appears as though a comparable issue is in finance also, that is the reason the financial plan took long to be introduced.

"It's not the inadequacy of Treasury, we as a whole ability Treasury works… The man [

Godongwana] isn't in a generally excellent condition, I suspect.

"The financial plan, in the wake of being introduced in Parliament, the board of trustees didn't sit to discuss the financial plan. Extremely surprising… it has never occurred.

Additionally READ: Godongwana set to venture down from ANC job to zero in on Treasury – report

"It's an issue with advanced age, even the president doesn't look great, they are wiped out. They are largely not appropriate, if they guarantee they are legitimate, we should proceed to do a general wellbeing check. You have a debilitated government.

"It should be a worry of each South African, we are in a tough situation," said Malema.

He declared that his party had since deserted discussions with the ANC to frame alliance states in South Africa's hung committees.

He clarified that the ANC had tried to hurry into conversations over positions and power-sharing, prior to talking about the standards and strategies raised by the EFF, which has since brought about the breakdown of exchanges.

Ramaphosa, Gordhan and Godongwana not in 'good health', claims 'Dr' Malema — The Citizen