Read| Jacob Zuma and Malusi Gigaba put on the spotlight

By Celebrityscoop (self media writer) | 6 months ago 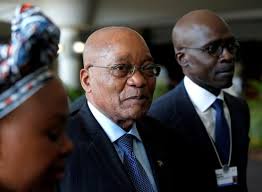 The second part of part 631 page of the state capture report was released on Tuesday and it takes aim at former president Jacob Zuma and four Gupta family associates which are former minister Malusi Gigaba and former Transnet bosses Brian Molefe, Siyabonga Gama, and Anoj Singh.

Gupta family lieutenants Salim Essa and Eric Wood, as well as financial services company Regiments Capital with its associated people, did not escape scrutiny either, with recommendations that they be investigated for illegal conduct on charges of corruption.

Deputy judge president Raymond Zondo's report paints a grim picture of how Zuma aided by ministers loyal to him, set out to capture Transnet which began with his insistence on the appointment of Gama ahead of Sipho Maseko back in 2009 - this, despite Gama having been found to be unsuitable for the GCEO position while Maseko was the most preferred by the Transnet board.

Part two of three parts of the state capture commission findings which was handed to president Cyril Ramaphosa on Tuesday it focuses on Transnet and Denel.

The first tranche of the report was submitted last month and the third and final part is expected to be released by the end of February. Zondo described Zuma's testimony on Transnet as improbable and a fabrication that should be rejected.

"[Former] President Zuma's... insistence on appointing Mr Gama to that position reflects the first steps taken by president Zuma towards the capture of Transnet by the Guptas with his assistance". Said Zondo.

Video: Hundreds Of Zama Zamas Boys Are Out In Germiston, Check Out What They Are Doing

'See Who Is Behind Illegal Mining According To Mogoeng

Here is all the 17 board of directors for Kazier chiefs

Checkout Bobby Motaung Net worth and his relationship with his Dad