Investigation reveals no evidence of GBV after removal of EFF MPs 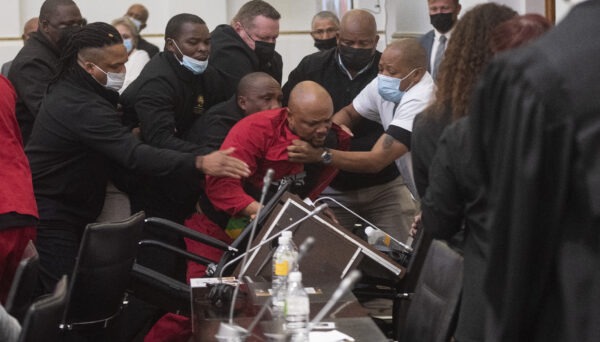 There was no proof of GBV during the removal of Economic Freedom Fighters (EFF) lawmakers during the June budget vote debate, according to an investigation.

Floyd Shivambu, the chief whip for the EFF, filed a complaint with Parliament requesting that Nosiviwe Mapisa-Nqakula, the speaker of the National Assembly (NA), look into claims of GBV made against MPs Babalwa Mathulelwa, Noluvuyo Tafeni, and Naledi Chirwa by the Parliamentary Protection Services (PPS).

The debate on the President's budget vote was delayed by more than an hour as a result of the disruptive behavior of the trio and other EFF lawmakers who were expelled from the chamber.

"The Speaker had appointed Adv. Elizabeth Baloyi-Mere to look into allegations of GBV or sexual harassment made by EFF Chief Whip, Mr. Floyd Shivambu, against the National Assembly Speaker and some members of the Parliamentary Protection Services and to counter allegations made by PPS personnel against the EFF Members of Parliament," the Speaker said (MPs). In a statement released on Friday, Parliament stated (sic).

However, the study discovered that there was violence on both sides during PPS' evacuation of the disruptive Members.

The statement claims that when the Speaker asked the MPs to vacate the area, they either disobeyed him or her or refused to listen to him. The investigation also revealed that Mapisa-Nqakula followed all rules and that ordering the EFF MPs to leave the chambers was her final choice.

"In addition, the report suggested that MPs show respect to the PPS staff. This is in light of the serious allegations that were made throughout the investigation and that the video evidence also supported the abuse, threats, and attacks PPS members frequently experience at the hands of MPs.

In the interim, Mapisa-Nqakula praised Advocate Baloyi-Mere for her investigation into the matter and stated that a procedure had started to put the report's recommendations into practice.

SOURCE; Investigation reveals no evidence of GBV after removal of EFF MPs (citizen.co.za)

Is This A Joke? Zuma’s Branch Nominates Mkhwebane For Top 6 Position