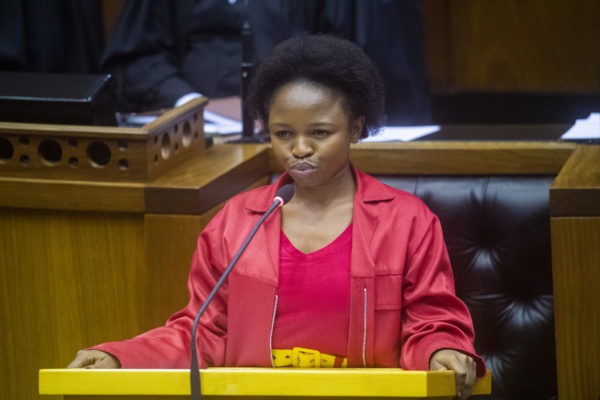 Naledi Chirwa who is a Malawian and a member of Parliament for the Economic Freedom Fighters commonly called the EFF has been the topic of discussion in social media after calling President Cyril Ramaphosa a “weak little boy” on Monday 17th of January in the morning.

She said this in response to Ramaphosa’s weekly letter in which he called on South Africans to “protect our Constitution, our democratic state and the electoral process from anyone who wants to weaken our democracy and deny the South African people of their hard-won freedom”,

Chirwa then tweeted: “You’re such a weak little boy. All your fellow stooges you sent to collapse Lindiwe were collapsed themselves. It won’t be surprising if you do what little boys do when overpowered by women. Throw the tantrum, we are expecting it. You’ll forever remain a toothless boy. Mfana ke mfana.”

She did not end there, she also said, “There isn’t a single thing the man has done that can ever warrant respect. Just because he has an honorable title doesn’t mean he is. Integrity is not a transaction and hierarchy will never equate steadfastness. Not all of us suffer from fear of powerful men. The problem is that you respect people for what they are and not who they are.

Seemingly in the mood to let the president and his followers have it, she add more to the insults and said, “You can lie to yourselves about my nationality until you turn green in the buttocks. It will not make your lies the truth and neither will it ever silence me. I didn’t buy my voice. I’m not renting it either. Rest assured I will always speak and there’s nothing you can do about it,”. She made countless allegations against the president and there was no stopping chirwa.

S expected, South Africans that support the ANC and the president came at her. Chirwa has been highly criticised for what people on social media called, “disrespecting” an elder. They said instead of debating the subject at hand she attacked his person. Some called her out for calling Ramaphosa a “weak little boy”, while she has, in the past, shown respect to the infamous Enlightened Christian Gathering (ECG) leader Shepherd Bushiri, who has been accused of many things including rape, money-laundering and fraud.

Bushiri has repeatedly denied the allegations. But that has not made South Africa believe him. What is your take on Chirwa's comments. Was she justified, or is she out of line.

Little girl slowly turning into a stone, see why

Sh0cking? See As Moslems Refuse To Abolitate The Death Penalty.