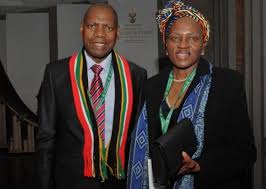 Zweli Mkhize who is the former minister of health, has revealed that he will be running for president during the next elections.

The minister who was once accused of having taken part in fraudulent activities revealed that he wants to be the next president of South Africa, this announcement was made during his sons wedding that happened recently.

His wife, May Mkhize, who seems to be in agreement with this decision, is also accused to being part of fraudulent activities. Both parties are accused to have played a part in the Digital vibes corruption.

It is also clear that president Cyril ramaphosa is also running for his second term as the president of South Africa. Zweli Mkhize will also be running for this position.

Many people shared their concerns stating that, the former minister has a long history of corruption linked to his name.

Do you think Zweli Mkhize will be the next South African president?