Resistance groups in the City of Joburg, including the ANC, upset the board meeting minutes after Speaker Vasco Da Gama decided that the appointment of the seat of seats and Section79 council seats would be held through a display of approval.

Gathering visitors were stunned after minority party pioneer and African Independent Congress (AIC) Constituency Administrator, Margaret Arnolds, drove a gathering of five into the board chamber's hall. Every one of them had chains on their hands flagging their disappointment with Da Gama's choice.

The bedlam broke out minutes after Cope's chief Colleen Makhubele had acknowledged the selection for the place of seat of seats.

Adapt is important for the DA driven alliance government. Makhubele was named by Mayor Mpho Phalatse and was favored by ActionSA's Funzi Ngobeni. The EFF had assigned Nonhlanhla Radebe for a similar position.

In November after the nearby government decisions, the EFF in spite of having decided in favor of the DA to lead the City of Joburg gathering, betrayed them for the second time on Monday.

The EFF and the ANC and minority parties are requesting that the appointment of the seat of seats, also Section79 councils should be held through a mystery voting form.

Notwithstanding, Da Gama remained by the choice he made on Thursday last week that there would not be a mystery polling form, which likewise drove the ANC, EFF and minority gatherings to disturb the procedures.

Tumult broke out again in the board chambers on Tuesday as these gatherings wouldn't pay attention to Da Gama requesting them to sit and casting a ballot to proceed.

The gatherings broke out in tune requesting that Da Gama adjust his perspective and request a mystery polling form. 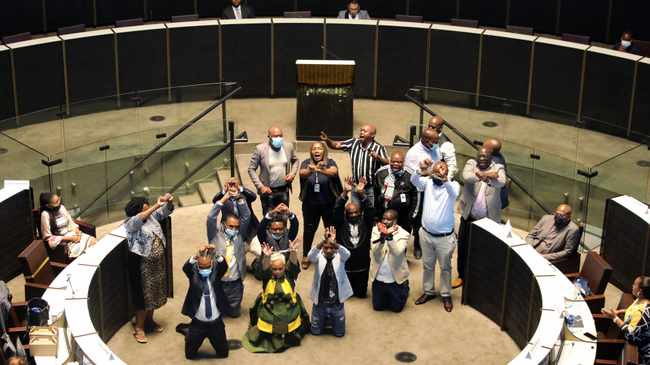