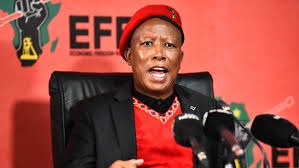 During an address of the 67th anniversary of the historic Freedom Charter at Freedom square in Kliptown near Soweto yesterday, Julias Malema made the accusations against the president.

He also addressed the State Capture Report by Chief Justice Raymond Zondo, stating that the report should be 'flushed in the toilet' because it was not worthy. He stated that the report was merely gossip and not a serious investigation.

Julius Malema has made these accusations previously, accusing Cyril Ramaphosa of being a 'puppet for the white'.

Julius Malema also encouraged people to vote for the EFF during the next elections he further gave the attendees a long list of reasons why the EFF was a better party to vote for compared to the ANC.

Chiefs Are Going To Loftus And Play Expensive Football

Man Allegedly Stabbed To Death By His Wife’s Lesbian Lover

A Man Have Been Stabbed To Death By His Wife's Lover, See What He Caught Them Doing That Day

Zwane: Blom had a terrible game against Royal AM and that is why he was benched against Maritzburg