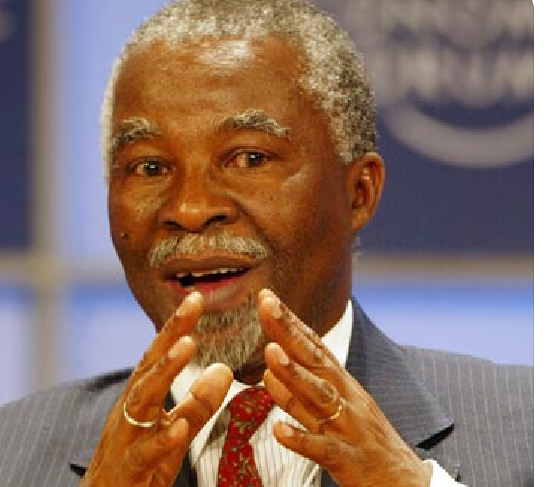 A president whose incisive mind cushioned us against the financial crisis of 2007–2008, and after his departure we just have people pretending to lead. Mangosuthu Buthelezi says you had to come prepared to his cabinet meetings because this leader was well-orientated on issues.

"Cushioned us against the financial crisis of 2007 - 2008"? Nigga stop smoking your knickers. The world economy went into recession and South Africa was one of the hard hit due to its dependency on exports of raw materials to the EU.

He is uninformed. We suffered nothing. It was a bloodbath out there. The suffering I remember was around 1998/9 when interest rates went up to 24% I think. Ever heard of the credit crunch in 2007/08 which resulted in The Great Recession, the biggest economic meltdown since The Great depression of 1929/30? South Africa was one of the worst hit countries in the world.

The fellows didn't want this “aloof” fellow who “wasn't consulting the collective” to steal, they wanted to do better, and they did, in PERFECT succession,—ANC electoral support✔️

Even when the black majority were poverty-stricken; we had hope. You knew if you went to school, you had a chance of becoming something. He was replaced with imigodoyi who allowed corruption to thrive; made education look useless; even with the lowest jobs you need some connections. A great leader, I think we were not ready as a country a president like him, I so wish he can be back at helm of our country. Do you remember the line which was mostly used by Many country which is” South Africa is punching above its weight”

In 1999 the then Eskom executives warned his government that in 10 years time, demand for electricity will exceed supply but Mbeki instead chose to buy arms. In 2007 he had to eat humble pie and apologize to the nation. You mean the President who declined Eskom plan to recapitalize back in 2000, and we wonder how load shedding started? You mean the one that denied people ARVs leading to the lowest Life Expectancy; the same President who signed off ETolls leading to country’s indebted, He had said when he left the was money for emergency reserve but soon thereafter it disappeared it was “eaten” by RET,

Will You Vote For Mogoeng-Mogoeng In 2024? Fellow Citizens Let's Talk About The Future Of SA