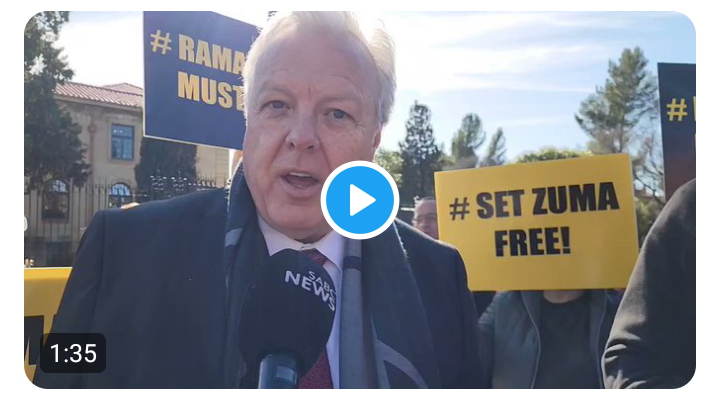 Lious Litchenburg says he is here to support former President Jacob Zuma and his group also says President Ramaphosa must go. Most, white Africans r now going broke in a way that, they are being used easily by blacks. Next we will, be seeing these white folks like Carl protesting in support of EFF. It's nice, I just want to see ANC gone out of power, but I have this question on @MYANC. How come Zuma is going in and outs of courts ALONE on Arms Deal case when those arms and equipment were bought when he was not even the President, not even the Deputy president but just a mere KZN MEC, He is not going to court for buying the arms but for accepting bribe to influence the government’s decision. Zuma is a sellout, that’s why he’s going to court alone, But the man was not in an influential national government position at the time. Make it make sense to me. What was his role in the whole procurement, negotiating and delivery of these arms.

Someone said on Twitter that, After seeing this video, I rushed to Google and found out that the gentleman is a fraudster, who was making a killing during Zuma Era. Now the taps are dry, he has been insulting Pres Rama ever since. Not surprising, though, it's the type of people that Msholozi attracts. Whites were also fed up with Zuma, and we were told that when whites complain you must know that Zuma was doing good. So, will still be going with that logic or dilo di chenchitse?

I was talking about Rama here ungenaphi Zuma manje. Kodwa nawe nje you know there's nothing Rama did for blacks, not unless he did it for you and your family only. He gave them R350 grants. He presided over a government that saved lives, especially those of black people, since they are a majority in this country. Who still wants Ramaphosa to Hold office…? Economy has turned to be worse than before. JZ tried so hard that everyone who lives in this country can at least afford to buy bread and jobs were created, infrastructures that we haven't seen from The New Dawn was built by Msholozi, Our bar for judging the performance of a President is low. It explains why we are a laughingstock on the continent.

Our African brothers and sisters are asking, how do we fail to even reach 5% of economic growth annually when you are the most industrialized on the continent?

So went no @tshidi_lee are getting paid to report about Zuma, Magashule and those aligned to them neh? There was a conference at North West, and we didn't see both of you, but as soon as bathi Zuma or Ace nivula imididi nibheke khona.