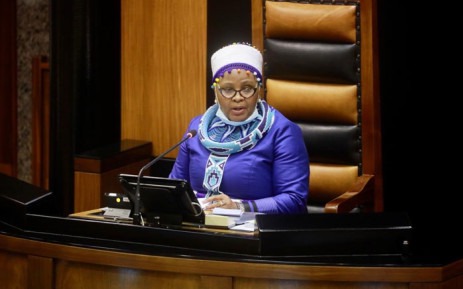 CAPE TOWN - National Assembly Speaker Nosiviwe Mapisa-Nqakula should take a new choice on whether or not there ought to be a mysterious voting form when a movement of no trust in President Cyril Ramaphosa is bantered in Parliament.

That's the decision of the Supreme Court of Appeal. In a judgment gave over on Thursday, the court maintained the allure of the African Transformation Movement (ATM) against a choice of the Western Cape High Court.

The party postponed its plan of no trust in February 2020, asserting state-possessed undertakings had imploded under Ramaphosa's supervision and claiming a scope of different disappointments on his part.

Then Speaker Thandi Modise declined the ATM's solicitation for deciding on the movement to be by secret voting form and the party went to court in an ineffective bid to have her choice set aside.

It then, at that point, moved toward the Supreme Court of Appeal.

In a judgment wrote by Supreme Court of Appeal judge Trevor Gorven, the National Assembly's Speaker is coordinated to return to the choice not to permit a mysterious voting form when the movement of no trust in Ramaphosa is debated.

The Speaker has additionally been requested to pay the expenses of the ATM's allure, including that of two counsel.

The court observed that Modise was off-base to anticipate that the ATM should give motivations to a mysterious voting form being important, and ought to rather have asked what casting a ballot technique would best empower MPs to execute their oversight obligations properly.

It said Modise's methodology was "in a general sense imperfect" and that she misconstrued the idea of her attentiveness in concluding whether casting a ballot ought to be open or secret.

It will currently be up to new speaker, Mapisa-Nqakula, to consider the matter anew.