By Chelsea_Official (self meida writer) | 1 months

There appears to be a large number of people who want access to the president's personal information. 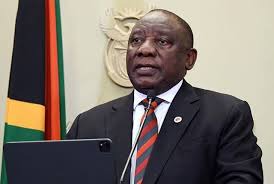 Initially, during a meeting, his iPad was stolen while he was about to deliver his speech on it. Some social media users jokingly "asked" the police, the Special Investigations Unit, and the Hawks to look into President Cyril Ramaphosa's "missing" iPad, while others chastised him for delaying his speech because he couldn't find the device. The iPad was later discovered in the possession of delivery minister Fikile Mbalula.

It has now been established that Ramaphosa's cellphone number was listed as a capability target for surveillance within the Pegasus spyware case. He was reportedly one of 14 heads of state targeted, including Pakistani Prime Minister Imran Khan and French President Emmanuel Macron. President Cyril Ramaphosa has been "taken aback" by allegations that the Rwandan government used an Israeli spy firm to hack his phone. This has caused quite a stir in the media, as the Rwandan president has the means to do so while his citizens are struggling financially.

Vaseline - 4 Reasons Why It Is Man's Best Friend

Dear Men, If She Does These 6 Things Please Marry Her

Immediately do this if your R350 grant application has been declined