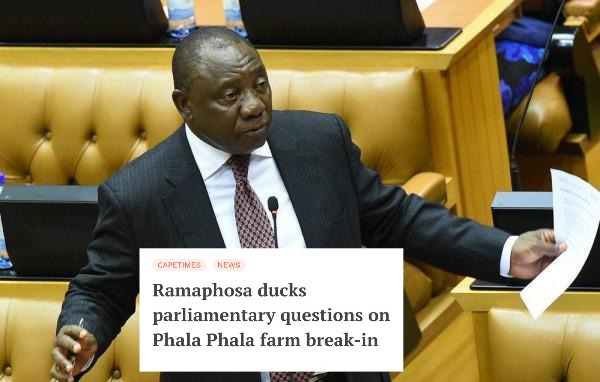 President Cyril Ramaphosa has shied away from answering parliamentary inquiries about the theft of $4 million (R61 million at the time) from his Phala Phala farm in Limpopo.

Instead, in response to specific inquiries from both DA leader John Steenhuisen and EFF deputy leader Floyd Shivambu, Ramaphosa opted to provide a standard response.

Several questions were asked of the president, but he always knew how to answer them. When Floyd Shivambu asked him to at least try to win public opinion by providing proof that the money was from auction proceedings, the president gladly told the eff deputy leader Floyd that he would gladly answer any questions the investigators asked him.

He was also asked if the phalaphala game farm money was the only money he had stored in his house or if there was more, and the president kept on telling them to allow the law to take its course and that due process needed to be followed.

When asked if he had received any huge monetary gifts on his visit to the United States, President Ramaphosa told everyone that all of the gifts that he had ever received during his period as both the deputy president and the president had been declared as required by law.