By Khokhie (self media writer) | 4 months ago 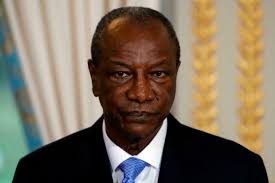 Guinea President Alpha Conde has been arrested by soldiers following a military coupe in the country. The military takeover of the government comes after Conde won a controversial third term last year.

The military coup was reportedly led by Lieutenant Colonel Mamadi Doumbouya, an ex-French legionnaire and an elite military unit commander.

Colonel Mamadi Doumbouya appeared on Guinean state television on Sunday and declared that President Alpha Conde’s government had been dissolved and he also announced that he is closing Guinea borders.

The report was followed by a cheerful multitude in the country, who despite threats of western sanctions seemed to be celebrating the move that, imitate, somehow the 2018 Zimbabwean coup that saw the removal and arrest of the then President R G Mugabe, by the military through a coupe lead by the famous General Chiwenga.