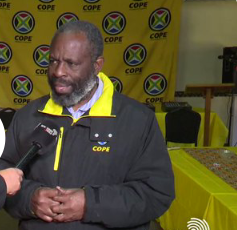 Cope Deputy President Willie Madisha has blamed the decline in electoral support to the ANC. He says rogue elements were sent into the party to destroy it. Madisha claims he was also approached to destroy COPE in exchange for a mine in Zimbabwe and 600 million dollars.

And now Madisha, what's up with this imaginary figure?

Something significant with the R600m number. Who on earth and in their right minds would turn down a R600 millions for COPE? They were not giving him that money they were telling him that to join that mine as part of them not as they were going to give him, but the whole setup is that amount of money. The ANC is worried about losing its support to all political parties, except for COPE-either because COPE has nothing to offer the electorate or they think that their existence is God given & that the party will grow without active mobilization & recruitment of new members. Grandstanding about having refused $600 million, when he once sang a similar tune about loads of money that was in the boot of a car, only paints him as “incorruptible”, doesn't elevate the party to greater heights-the party is dying under the leadership's watch.

Madisha 600mln. Mogoeng 600mln. This obviously cannot be true. Both are telling lies. lol there is no such thing, the ANC has never been a treat to the ANC. so, why would anyone pay R600 million?

Since COPE isn't politically relevant in any way, is he lamenting not taking up the $600 million offer, or? What's the presser about antler? I also don't know. Are we meant to be grateful an irrelevant party wasn't sabotaged?

I think so, maybe. Nobody would've noticed if they left to go mine in ZIM.

If you looked into it, you may find that Terror is already there, since he did sabotage the operation. Oh, well, once told us that they gave him money in a plastic bag. Ndzimande denied that claim. Hence the gentleman quickly got gray shame. Willie is taking chances. His party spiral downfall began when sam and terror fought for leadership position. Gangs such as smart, moloto, to just mention few, left that circus party. Sipho Pityana,Mogoeng, Madisha all 600 million bribe and some are suffering to reject this money. We are tired of this 600 m propaganda, Haha! Madisha like Mcebisi Jonas wants us to believe that he rejected $600m just to save the dead lion called COPE? Nothing can be more laughable.

Madisha and money! The plastic bags he gave Blade. I wonder why would one approach him to jump ship, as he has no constituency to speak of?