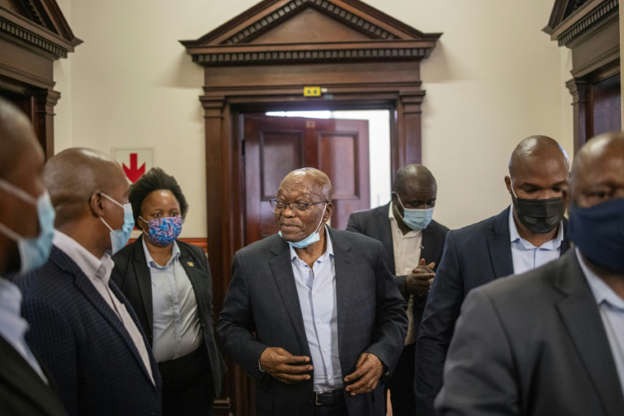 Pietermaritzburg- Former President Jacob Zuma was awaited by his fans and media practitioners outside Pietermaritzburg Police Station, in Loop Street on Thursday.

Msholozi arrived at the Capital city just after the lunch hours to fulfil what he said. He was being accompanied by his daughter, Duduzile Zuma. It will be remembered that the Jacob Zuma Foundation had issued a statement on Tuesday that UBaba will be laying a criminal case against State prosecutor Billy Downer. 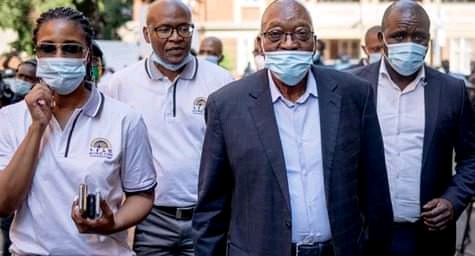 President Zuma was warmly welcomed by his supporters who were excited to see him in public for the first time since his arrest. Although he did not speak much to his fans but he definitely did drop a bomb about the NPA.

Msholozi is accusing the National Prosecuting Authority's advocate Billy Downer SC for allegedly leaking confidential medical records to journalists while the State vs Zuma hearing was under way.

Zuma, in a nine-page sworn statement given to officials at the Pietermaritzburg police station, said there was criminal interference in his case as people who were not authorised to conduct an investigation did so.

Zuma stated with confidence and assurance that Downer leaked the document to a journalist in August this year.

As uBaba arrived at the Pietermaritzburg police station in the Msunduzi municipality, he gave a brief message to the media before the Zuma Foundation spokesperson, Mzwanele Manyi, read out the full affidavit.

Zuma said outside the station: “We are here to open a case for the prosecutor. They'll read and say what the case is about. There's nothing more I’m going to say. I’m going to leave them here. You'll be able to bond with them because you already know them. You cannot bond with me because I am a prisoner and prisoners get beaten.”

The NPA issued a statement on Thursday saying it was aware of the charges being brought against Downer, but said it was concerned about the context within which the charges were laid.

"The NPA is committed to upholding due process and the rule of law and will assess the merits of the charges in an objective manner. We also note that these charges are laid while the matter is subject to judicial determination by the High Court in Pietermaritzburg and judgment is expected to be delivered on October 26," the NPA's spokesperson, advocate Mthunzi Mhaga, said.

"While the law must be allowed to take its course, the NPA is concerned about the context within which these charges have been laid, and the timing in light of the pending judgment of the High Court."

Next week, uBaba's trial of the arms and the judgement on Downer's recusal will resume at the Pietermaritzburg high court.

OPINION : A family meeting and a temporary ban on provincial travel loading