Zuma's children to be arrested if responsible for the unrest 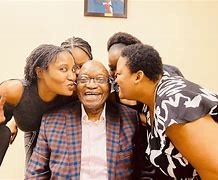 South Africa's Acting Minister in the Presidency, Khumbudzo Ntshavheni has clarified that nobody will be excluded from confronting the results of their contribution in the mobs and plundering occurrences. In July this year, the Democratic Alliance (DA) affirmed that they will lay charges against former President Jacob Zuma's twins Duduzile and Duduzane Zuma, their sibling Edward Zuma and EFF pioneer Julius Malema.

Former President Jacob Zuma's children will be scrutinized over last month's rioting in South Africa. More than 300 people died while shopping malls, warehouses and businesses were vandalised, and plundered. Acting Minister in the Presidency Khumbudzo Ntshavheni did not exclude out a probe of former President's children, Duduzane and Duduzile.

Duduzile Zuma-Sambudla will have to answer for her utterances, says ANC's deputy secretary-general. She appeared to take a swipe at President Cyril Ramaphosa on social media, defending the "criminal elements" who were behind violent looting. SAPS has warned those who are identified for inciting violence on any platform will be arrested. SAPS spokesperson Col Brenda Muridili said they have issued a warning that those who incite violence will face arrest. Malema tweeted: "We need a political solution to a political problem, not soldiers"