Eboni K. Williams Is Gunning for Full-Time Slot on 'The View,' Would Film With…

The nearby government races might be the focal point of concentrating the present moment, however, there is expanding proof that the political story after the surveys will be overwhelmed by one more time of lawfare – to the inconvenience of the legal executive and the country. 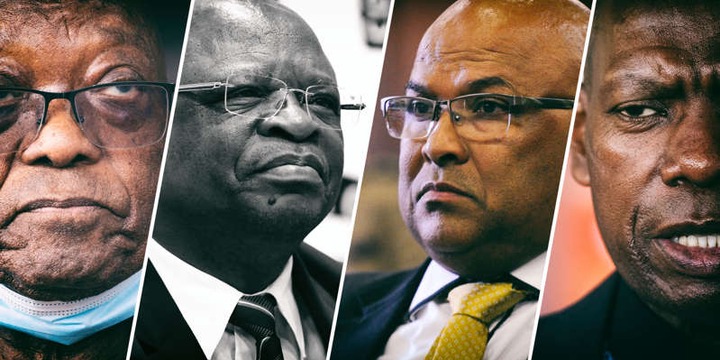 Sooner rather than later, there are probably going to be more court difficulties by the individuals who have something to lose from the ANC's expressed arrangement of reestablishment, which, in a most dire outcome imaginable for President Cyril Ramaphosa, could gush out over into the cycle to name another Chief Justice.

On Tuesday, it arose that previous wellbeing clergyman Dr Zweli Mkhize was testing the discoveries of the Special Investigating Unit's (Siu's) examination and report into the Digital Vibes outrage.

Mkhize might think that it is hard to succeed – the SIU has highlighted proof that he sent WhatsApp messages to the previous wellbeing chief general Dr Precious Matsoso requesting that she proceed with the agreement with Digital Vibes. Except if he can concoct a persuading clarification concerning why he sent those messages and why his family benefited nearly R9-million from the cash that was paid (Mkhize currently guarantees he is irritated from Dedani), his legal advisors might track down this a troublesome case.

Likewise on Tuesday, it arose that Arthur Fraser, the previous Director-General of State Security and previous Correctional Services official, had kept in touch with the board analyzing the candidates for the situation of Chief Justice and officially protested the assignment of Deputy Chief Justice Raymond Zondo, contending that he was not fit to be an appointed authority, not to mention Chief Justice.

Fraser puts together his case with respect to his conviction that he was unjustifiably denied an opportunity to react to claims made against him at the Zondo Commission, which Zondo seats.

Fraser's complaint was gotten rapidly, joyously, by that most helpful indicator of the supposed Radical Economic Transformation group of the ANC, the Twitter record of Mzwanele Manyi.

While the board should conclude how to manage the complaints, it is possible that Fraser's protest steers clear of the situation of Chief Justice but instead the potential discoveries that Zondo might make against him in his report radiating from the hearings into State Capture. Fraser's complaint might be a pre-emptive move to him trying those discoveries.

As a legitimate technique, it very well may be beneficial for him to mellow the ground and set up the argument against Zondo.

The political and public system of this move is more significant – it readies the story for the lawful cases to come and for a long political battle.

Fraser might well have similar interests as numerous others, including previous president Jacob Zuma, Malusi Gigaba and Matshela Koko.

Zuma's new activities give further supporting proof to this idea. His establishment says it is dwelling a "criminal accusation" against the examiner in Zuma's Arms Deal preliminary, advocate Billy Downer.

This is an inquisitive case. Manyi and others guarantee that Downer "released" Zuma's own clinical data to a columnist. Yet, this issue has been contended in open court between Zuma's legitimate group and the State. The adjudicator concerned has not yet made a finding. What's more, subsequently apparently Manyi is attempting to lay a criminal allegation in regards to a case that has as of now been contended, however for which no finding has been made.

The adjudicator might run there was no bad behavior with respect to Downer. In which case, why lay the criminal allegation?

Apparently, this has more to do with the governmental issues and the account than the law. As such, it's important for a supported endeavor to keep the cases against Downer in the news, regardless of whether there is no legitimate likelihood of coming out on top.

While these lawful applications and complaints may not be founded on the law, and may, eventually, be lost, the genuine point could be to cause harm for Ramaphosa's plan and the legal executive itself.

This is all event at a delicate time for the legal executive – the situation of Chief Justice is empty and there have been reliable endeavors to subvert trust in our adjudicators, with Zuma, Ace Magashule, Julius Malema, and others making unwarranted cases about judges.

While these cases are for the most part observed to be unjustifiable, the steady idea of the assaults has had an effect.

The most recent Afrobarometer review says that just 43% of those addressed trust the courts.

While popularity-based South Africa rose up out of a past where law and order, and hence the courts, was ill-conceived, the force of a supported mission can't be disparaged. For this situation, the people who need to subvert trust in law and order might have had critical achievements.

One way for Ramaphosa's rivals to proceed with this mission will be to sabotage the most common way of choosing another Chief Justice.

For instance, were Zondo remembered for the waitlist, Fraser could endeavor to request that an appointed authority upset the board's choice. Considering the measure of prosecution the Judicial Service Commission has confronted, it would be nothing unexpected if somebody somehow happened to endeavor to hold up an application around its hearings.

The point here is to create setbacks and dissatisfaction and leave the legal executive leaderless and along these lines more fragile. And keeping in mind that it would be without a Chief Justice, its accepted chief would be Zondo himself, who has effectively been assaulted (it ought to be noticed that there might be a few constraints to this: the Promotion of Administrative Justice Act doesn't have any significant bearing to legal arrangements, which might restrict the extension for these applications).

While it is hard to survey the effect of this sort of lawfare, it is altogether conceivable that it debilitates the trust and consequently the authenticity of our foundations.

What's more, this is when the proof focuses on the expanding shortcoming of our state. DM

South Africa and the judiciary will be under threat in the post-election season of open lawfare (msn.com)