The Congress counterattacked by the Home Minister's comment, said - we are not part of Gupkar, the s

By SeebuBlackberry (self media writer) | 1 year ago 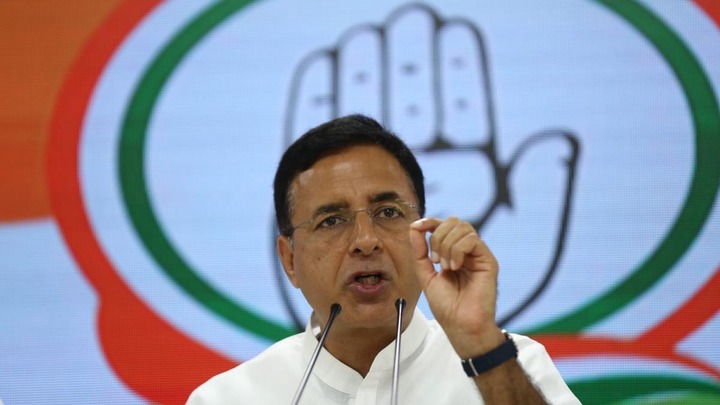 The Congress retaliated after Union Home Minister Amit Shah on Tuesday slammed the Manifesto Charter Alliance (PAGD), alleging that Shah's statement in the case was misleading, mischievous and utterly false. The party's chief spokesperson Randeep Surjewala also said that the Congress is not involved in the PAGD and it is contesting the election of the District Development Council in Jammu and Kashmir to expose the 'anti-people' face of the BJP.

Significantly, Home Minister Amit Shah on Tuesday called the PAGD as a gang and alleged that he wanted the intervention of foreign forces in Jammu and Kashmir. He also alleged that the Congress and the Guptkar gang wanted to bring Jammu and Kashmir back to the era of terror and turmoil. He also asked Congress President Sonia Gandhi and former President Rahul Gandhi to clear the party's stand on the PAGD's footsteps.

In response, Surjewala issued a statement saying, "Lying, spreading fraud and creating new illusions have become the goings-on, face and character of the Modi government." The shame is that the Home Minister of the country is making false, misleading and mischievous statements on Jammu, Kashmir and Ladakh, bypassing his responsibility for national security.

The Congress leader said, the Congress strongly condemns the conduct of Amit Shah and the ministers of the Modi government and reminds them that their behavior on Jammu, Kashmir and Ladakh is the same as the cat eating Hundred Hats . Surjewala emphasized that the Congress party is not part of the PAGD.

He said, the Congress leadership has written the pattern of sacrifice and sacrifice for the country with its own blood. The people of the British slave and puppet parties can probably understand the sacrifice of sacrifice for neither the country nor the tricolor. According to Surjewala, "The Congress Party will never accept that the national identity, integrity or tricolor will be affected." Nor has the Indian National Congress accepted nor will it accept any foreign interference in the internal affairs of India including Jammu and Kashmir. The glorious history of India for 70 years is a witness to this resolve of the Congress.

Accusing the government, Surjewala also asked, "Why did the current government at the Center invite the terrorists' ISI to India by inviting them to investigate the Pathankot airbase attack and why did Amit Shah repose faith in the ISI?" He said, "Congress is in favor of democratic elections in Jammu and Kashmir and for this purpose the Congress party is contesting the election of District Development Council so that the anti-people face of BJP can be exposed in a democratic way.

The PAGD comprises various parties from Jammu and Kashmir including the National Conference and the Peoples Democratic Party (PDP). The alliance has sought to restore Article 370 of the Constitution, which gave special status to the erstwhile state.

BEAUTY TIPS: Ladies Here Are The Best Ways To Remove Make Up After A Long Day

Trouble for Zimbabweans, Nigerians and Ethopians as the MFC plans to do this

Remember The Man With 39 Wives, 94 Children, And 33 Grandchildren. See photos below.

9 Reasons Everyone Should Drink Turmeric with Water Everyday

Sprinkle Baking Soda in your yard for these benefits

Man used a clever way to escape police chasing him