King Mswati has deployed soldiers and the police at Lomahasha in the eastern parts of eSwatini as political chaos erupts again.

This comes after hundreds of Lomahasha residents marched to Lomahasha police station demanding answers on the matter involving Constable Sehlakalo Dlamini who allegedly shot and killed two residents who were criticising King Mswati at a funeral on Sunday morning. 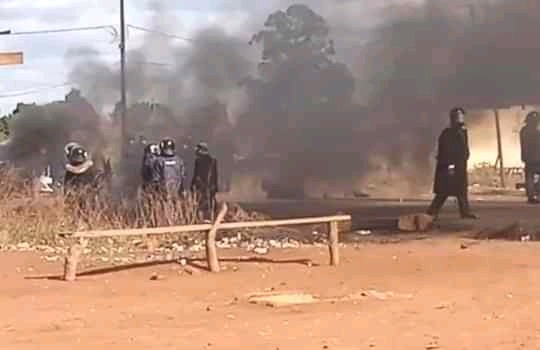 Residents of Lomahasha subsequently engaged in a night protest on Sunday evening as political temperatures continue to rise in this tiny Kingdom.

Speaking to this Swaziland News , Siboniso Mkhabela, one of the organisers of the march confirmed the matter adding that the Lomahasha Police Station Commander told them the accused police officer had been already apprehended.

“We wanted to know why the residents were brutally killed and if the killer has been apprehended. We also wanted to know how he gained access to the gun since he was off duty. The people have also threatened to burn the police station, we might never be sure what will happen at night but we are trying by all means to calm the situation”, he said.

Shortly after the march, William Tsitsibala Dlamini, the National Commissioner of Police issued a statement announcing that the suspect had been apprehended and would face the full might of the law.

“The police officer in question has been arrested and suspended from work. The law will surely take its course . We appeal for calm from the Nation as this matter will be dealt with accordingly”, said the Commissioner.

Wandile Dludlu, the Secretary General of the People’s United Democratic Movement (PUDEMO) in an earlier interview with this publication said police and soldiers take orders from King Mswati as Commander in Chief.

“It is for these reasons that the police officer killed the two because there is an order that all those who are opposed to the King must be killed”, said the PUDEMO Secretary General.