George Charamba specializes in lying on Twitter to taint images hoping that citizens will believe his lies, In a normal country a president’s spokesman would never tweet this nonsense. This is what makes us a Banana Republic, his madness destroys his own boss and the image of the country, maybe he wants him destroyed after all considering the effort he puts to make him look bad with his irrational tweeting!

Unbelievable, but not surprising at all, the police are now investigating the attempt on Chamisa's life. They've asked where the incident occurred to designate it a crime scene but Chamisa and his people don't know where it happened. Chamisa's party officials who were present in the car(s) that were allegedly shot at have refused to give statements to the police. They've also refused the police permission to do forensics on the vehicle that they say has bullet holes. 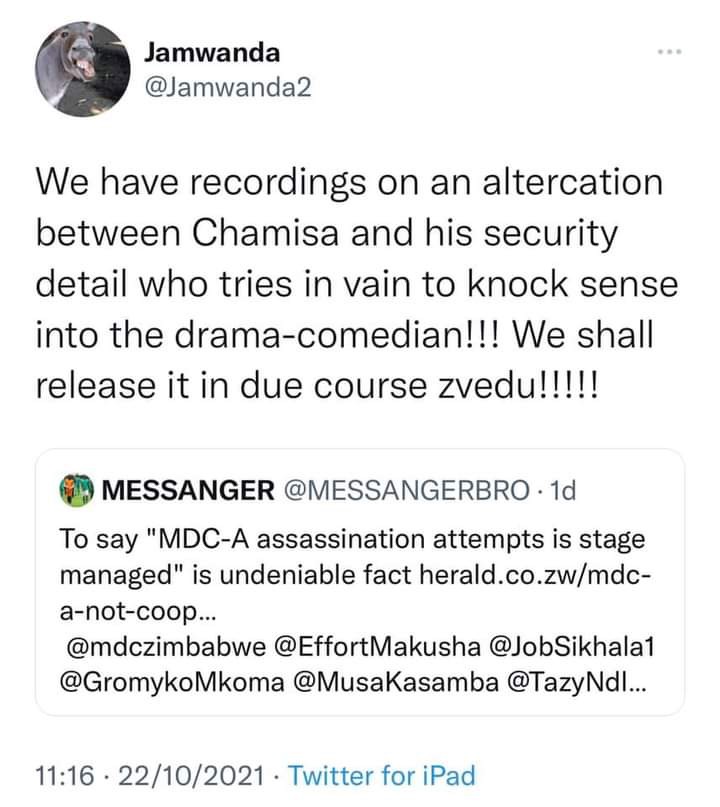 And why did they leave the scene of the crime in the first place which results in contamination of potential evidence? Maybe they are waiting for FBI or Scotland yard to fly in and investigate, it just doesn't make any sense why they don't want the police to investigate a case of attempted murder of their "President". Ohh, but it does make sense. A lot of it! I mean, they run the risk of being found out

The fact that they did not report this incident to a police station made their claim very suspect, they should have asked Chamisa the police case number and even visited the so-called scene. But they are too scared next time that inquisitive journalist will be marked for being Zanu, or just excluded from the next juicy headline. I sincerely hope that all security apparatus are watching this new opposition strategy, this is followed the next day by an EU ambassador demanding that ED stops persecuting the opposition. By the way, I do not support Zanu. But opposition should not assume that we are gullible too childish claims, which have become the hallmark of an opposition without any strategy