By Celebrityscoop (self media writer) | 1 year ago 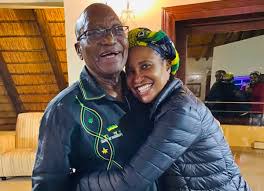 From being a pampered diamond queen to being labeled as a instigator of violence - that's the story of Jacob Zuma's daughter Duduzile Zuma-Sambudla.

The former president's daughter has actively been accused of encouraging mayhem and violence in South Africa, following the arrest of her father.

The custom-made diamond necklace Duduzile Zuma-Sambudla wore on the day she married ANC linked businessman Lonwabo Sambudla in 2011, was worth a whooping R1.5 million and it was heavily guarded by the police. 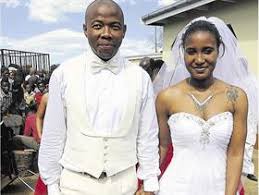 The wedding was held at Inkwenkwezi Private Game Reserve near East London, and it was guarded by the watchful eye of private security, the presidential protection unit and SAPS.

South Africans are not enjoying the same personal protection this past week like Duduzile enjoyed her lavish wedding ceremony. Looting is continues in the country - following Jacob Zuma's arrest for contempt of court, and was sentenced to 15 months imprisonment.

Barely 48 hours after the former president was detained, at the 11th hour to begin serving his 15 months sentence, violence began with the burning of trucks in Mooi River.

And Duduzile Zuma-Sambudla, a woman who wedded in an off-the shoulder gown encrusted with Swarovski crystals - has being accused of being an instigator of violence.

An account in her @DuduZuma-Sambudla, tweeted: " Mooi River, We Still See You. Amandla!". And a video of a pump-action shotgun being emptied into a poster of president Cyril Ramaphosa was also retweeted by Duduzile Zuma-Sambudla and was later deleted.

However, both the Twitter accounts continued to tweet and instigate violence. And Duduzile has done absolutely nothing to stop violence being instigated in her name.

ANC deputy secretary-general Jessie Duarte said even if Duduzile claimed that she had been merely sharing or retweeting 'events', statements such as "Let it burn", were clearly inciting violence.

Duduzile is expected to explain herself as she is a member of the ANC, Duarte said Duduzile has to explain what her tweets meant.