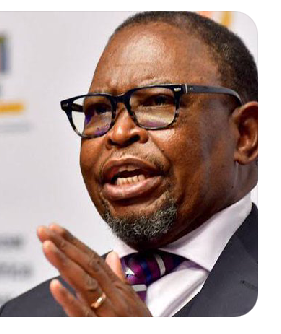 There's nothing the ANC's Integrity Committee should be discussing with Enoch Godongwana. He should be arrested, stand trial, and give his defense under oath. White people have convinced that ankoles that they are above the law. Power is temporary

Why this SG Magashule stepped aside, he is not even employed in Government, and yet people like abo Enoch Godongwana are still sitting as Ministers. Integrity committee without integrity.

You're right, we can't have a situation where politicians create their own police station apart from the one we know. It's he suppose to be behind bars…. Wait for bail and so on why is he still roaming outside as if he is not an offender if it was our brothers they would be in jail by now. The police are still investigating the case. They must first obtain his warning statement. Many steps before possible arrest and court appearance. An integrity-less Committee discussing matters of integrity. I give up. Sexual harassment is a criminal offense, and it should be dealt by the courts. Period. Maybe you can help me—what's the name of this Spa? What's the name of the police station the case was lodged? Who's the investigating officer? Any description at all the woman (age, race, anything really)?

that's the truth. On Twitter, it may seem people care, but in reality they don't. At the end of the day, it becomes a deserve to the people who are violated. Integrity committee is being given more power than state institutions, and they should not cry when the next crop of leadership of the ANC do the same, has that integrity Stokes ever referred a matter to court because they don't have resources to investigate every wrongdoing.

How will they investigate a rape allegation?

What you have stated is correct. The Integrity “Stokes” is an internal ANC process and is separate from criminal procedures. Both must take their course. The committee itself doesn't have integrity, so they cannot not deal with any matter.

They are a factional integrity, if it were Malusi Gigaba they would ask him to step aside long time. That integrity committee is now becoming an accomplice in this whole matter. They’ve got no competence to deal with this serious matter. Integrity Committee is a waste of time for us ordinary South Africans. This is just done to buy time for comrades. Law enforcement agencies are quick to pounce on ordinary citizens, but investigate endlessly when it's one of the leaders of the movement. What is the matter here? Sexual assault or sexual harassment? If it is the latter, it has different levels such as inappropriate touching which could amount to attempted rape. If it is verbal only comments, it may not be a criminal offense. ANC integrity committee can handle it.

Trending Today, Inmate Takes Social Media By Storm As He Has His Clothes Tailored