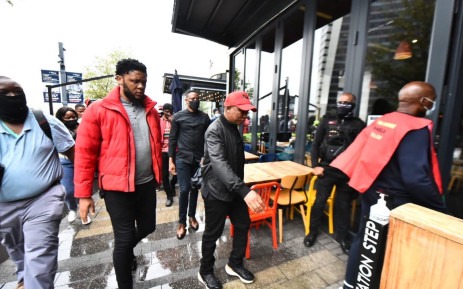 leader of the EFF, Julius Malema has today forced the owners of the popular Kream restaurant at the Mall of Africa in Midrand, Johannesburg, to meet him and two other party MPs. This came after they had initially refused on Wednesday.

Malema was in the company of EFF spokesperson Vuyani Pambo and they met with Kream’s financial director Rad Jankovic outside the establishment.

Jankovic has initially turned down the meeting with the EFF delegation led by Malema and stated that: “No, we are not going to meet with a delegation, Julius, I can’t. I’m going to speak to the management and I’ll let you know.”

Malema said he had an appointment with Jankovic and Kream establishment.

Jankovic said ”There is no appointment with me, you have not come with me with an appointment,"

The outspoken Malema was not going to take no for an answer he said to Jankovic: “The problem is that people come to you so peacefully and then you guys just decide to be difficult" and insisted he there as a member of Parliament doing official oversight, to which Jankovic replied by asking if Malema had an official sanction from Parliament to be at Kream.

Melena responded, ”I don’t need a sanction to be here; when I do my oversight I don’t need sanction from anyone. The arrogance you are displaying is not going to help you,” Malema said.

Malema then described Jankovic’s attitude as a display of what he called “white arrogance”.

It is well known that most white people don't really like the EFF and the way it chooses to conduct business, and malema immediately threatened to bring more people if his meeting was not going to be granted.

He said, ”If you are doing that I will have to call more people to come and join me here. You are not only putting your business at risk now, you are going to affect everybody,” Malema said.

Malema went on to say, He continued: “on Tuesday the 18th of January, they confirmed that we can come and meet them on Wednesday the 19th of January. It is in their interests, it is in the interest of every business that operates here that we meet and we get to understand what constitutes their employment.”

Malema said Kream was known to have taken a decision to exclude South Africans from their employ.

”They do so because they want to create an impression that Africans are taking jobs from South Africans. So they are dividing our people,” he said.

Jankovic finally relented, saying: “It is myself and my partner, we are happy. I think that will be fine, we can have a conversation.”

Read What "Mercedes Looter" Said After He Was Caught Stealing At Woolworths. It'll Leave You In Pain