By KevinGary | self meida writer
Published 14 days ago - 732 views The 11th of February marks the day Nelson Mandela was released from prison in 1990 after spending 27 years. The was joy and jubilation as it signalled a new dawn in the country. But Mbuyiseni Ndlozi doesn't think so. 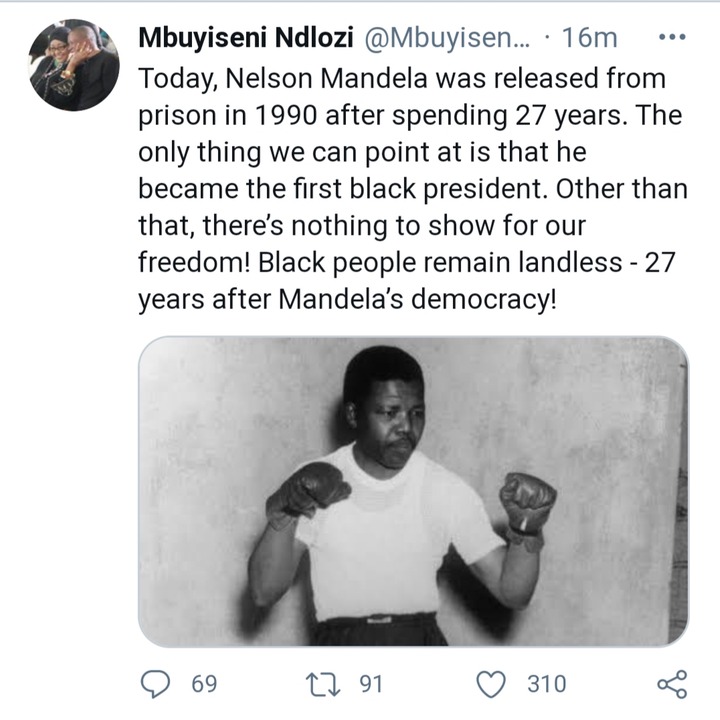 Ndlozi said: "The only thing we can point at is that he became the first black president. Other than that, there’s nothing to show for our freedom! Black people remain landless - 27 years after Mandela’s democracy!"

Former President Mandela did his part. The African National Congress retained majority for a very long time but failed to complete the job. It's worse now under President Cyril Ramaphosa. The good thing is that Mandela helped bring our freedom, at least, from a government whose only reply was savage attacks on an unarmed and defenceless people.

The EFF is in parliament with all these rights and privileges and can't even help stop ANC from looting right before their eyes. Protect the people from that, at least.

African National Congress Cyril Ramaphosa Mandela Ndlozi Nelson Mandela
Opera News is a free to use platform and the views and opinions expressed herein are solely those of the author and do not represent, reflect or express the views of Opera News. Any/all written content and images displayed are provided by the blogger/author, appear herein as submitted by the blogger/author and are unedited by Opera News. Opera News does not consent to nor does it condone the posting of any content that violates the rights (including the copyrights) of any third party, nor content that may malign, inter alia, any religion, ethnic group, organization, gender, company, or individual. Opera News furthermore does not condone the use of our platform for the purposes encouraging/endorsing hate speech, violation of human rights and/or utterances of a defamatory nature. If the content contained herein violates any of your rights, including those of copyright, and/or violates any the above mentioned factors, you are requested to immediately notify us using via the following email address operanews-external(at)opera.com and/or report the article using the available reporting functionality built into our Platform