Fikile Mbalula, the ANC's head of elections, has laughed off a moemish in which he urged people to vote for the EFF. Mbalula uploaded a video of ANC leader Cyril Ramaphosa campaigning in Polokwane's Ward 26 on Sunday, with the hashtag #VoteEFF. While Mbalula was scrambling to remove the tweet, it quickly went viral and was retweeted by EFF deputy leader Floyd Shivambu and MP Mbuyiseni Ndlozi. "Fighter Mbalula can no longer conceal his actual objectives. This is no longer an error. "It's a ringing cry for all South Africans to #VoteEFF," Shivambu stated.

"The ANC's head of elections, Fikile Mbalula, has urged all South Africans to #VoteEFF," Ndlozi stated. Duduzile Zuma-Sambundla, the daughter of former President Jacob Zuma, stepped in, questioning if Mbalula had sold his loyalties. "Is it possible that my close friend Mbalula is batting for the wrong team?" "I believe the EFF offered him a job or something," she added. In response to the allegations, Mbalula stated that the blunder was a "autocorrect" moemish.

"Wait a minute, Mr. Shivambu. That hashtag on Twitter is an autocorrect. "I'd like you to #VoteANC," he said to Shivambu. It is not the first time that representatives of the two parties have incorrectly pushed people to vote for their opponent. Mbalula uploaded a video earlier this month in which an EFF member was heard incorrectly saying "viva ANC" before correcting herself. The moemish was being mocked by the audience, who could be heard giggling. 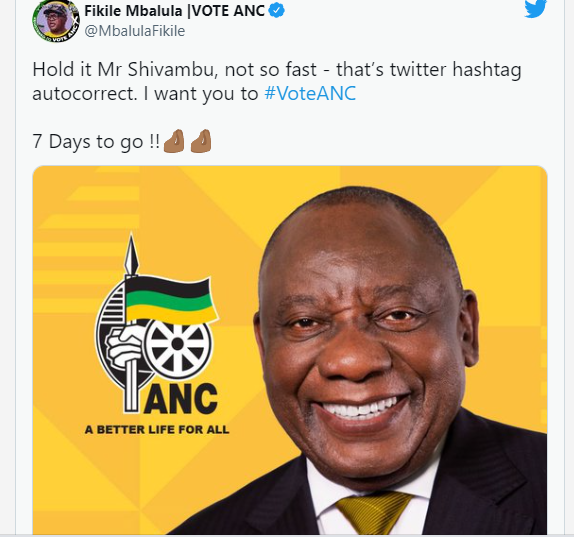