By Timeline-Threads (self media writer) | 4 months ago 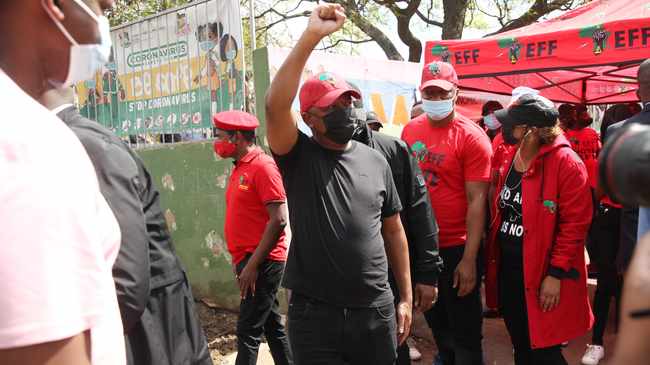 EFF Leader Julius Malema in Phoenix on Saturday. File photo: Doctor Ngcobo/African News Agency(ANA)"/>When unruly ANC members attacked EFF leader Julius Malema and his supporters on the final day of his party's voter mobilization effort in KwaZulu-Natal, it was a horrible day for him and his followers.

The violent occurrences in Pietermaritzburg's Dambuza and Willowfontein townships on Sunday prompted Malema to declare that there can't be free and fair elections if the ANC is preventing other registered parties from participating.

Malema eventually left the station, escorted by his security, and headed to another station in Willowfontein. Members of the ANC surrounded and followed EFF members around the township. The outcome of the brawl was not immediately known.

Malema would subsequently face the most vehement opposition at Thandokuhle registration in Willowfontein, when ANC members barricaded the entrance. Marshal Dlamini, the EFF secretary general, attempted but failed to lead EFF members to break the ANC roadblock.

After almost an hour of standoff, armed police came, summoned leaders from all parties, and mediated a compromise that resulted in the gates being opened, and Malema inspecting the station before leaving. Malema and his followers were once again surrounded by boisterous and enraged ANC members as they were being led away.

Sibusiso Mkhize, the leader of the ANC branch in the region, claimed his members were enraged because the EFF reportedly bused in people to register in the ward and vote for a dubious candidate.

He also charged the EFF with participating in unethical behavior.

"The EFF was registering individuals who didn't live in this ward to vote for their dubious candidates." Our folks had been