How King Mswati uses culture, poverty to mislead the world about his ‘popularity’

By HomeAway (self media writer) | 5 months ago

Regiments who attend Incwala and other cultural activities are normally escorted by security forces, no Swazi was ever teargased during these King’s gatherings.

But Swazis who organized protests to demand their democratic rights are arrested, tortured, shot and killed by Mswati’s security forces.

Despite this persecution, the number of progressive citizens is growing.

Now, we are seeing Mswati’s government trying to play politics by publishing pictures of a Lusekwane crowd, these people went there without fear of being attacked by the police because they support Mswati.

It is clear who gives orders to the armed forces to shoot and kill civilians or disperse crowds. 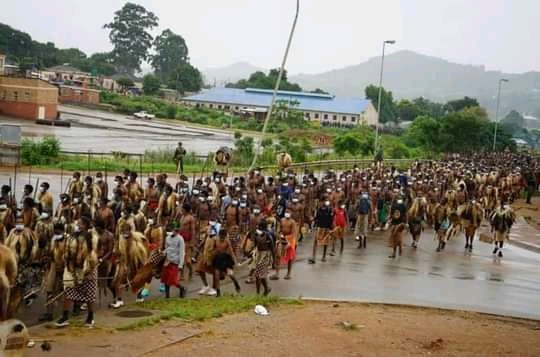 If these soldiers and the police where not taking orders from the King but enforcing the law why can’t we see them throwing teargas to disperse bafana beLusekwane for breaking COVID-19 regulations and failing to observe social distancing?

Therefore, the thousands of protestors who delivered a petition at the United States Embassy despite the risks of attending protests in this country cannot be compared to Mswati’s ritual gathering disguised as a cultural event.

In fact political leaders must engage SADC and other world organizations to deploy peacekeeping soldiers in this country who will escort pro-democracy protestors so that Mswati can see how many people want him to vacate the Throne.

Citizens who lack political understanding might be misled into believing that the crowd attending Incwala supported Mswati, some went there for food.

The level of poverty in this country has popularized gatherings where food would be served and this include Incwala, weddings, birthdays, some citizens only get to taste meat during such gatherings.

Even during funerals, you find a large crowd with very few people assisting the family to prepare the burial site while others wait patiently for an announcement to get food.

Mswati has been pushing people into poverty so that those hungry citizens can follow him just for a plate of food.

Furthermore, members of his security forces are forced to attend his ritual events at taxpayers expense just to enhance the crowd, unfortunately, Mswati is not aware that the mere fact that people now have to test for COVID-19 before attending Incwala exposes the real numbers.

I am the majority shareholder of Billiato. Not only am I an owner but I'm the founder, says Cassper.

5 sicknesses that can be cured by rice water

New scam| Watch out for this new scam below

SASSA apologises to grant beneficiaries for the following thing

Musa Khawula says Cassper Does not own Billiato. Read

Man shares brilliant idea on how to stop Illegal foreigners in SA, this will leave you in shock