The factionalismn that is within the ANC is starting to emerge and it can now be seen by all people. The president has been saying that people should criticize the government for not doing their work and they should also criticize him as the president of the people. However it looks like this was meant for some leaders and not him. People who come out openly and talk about the president are being punished and indeed they are. It has emerged that the ANC has suspended one of it's senior official Marvin Dirks. This is after he called for Scopa to act against Ramaphosa on comments of funds abuse. It looks like Ramaphosa is untouchable at this current moment. Anyone who goes against him, he is shown the door. By the time we come to realise, the ANC will be without any member and now that we are heading up to the 2024 national elections, the party might just see flames.

We can all remember that audio where Ramaphosa has admitted that the party has missed the state funds and Dirks wrote to Scopa saying that Ramaphosa must appear before them. But it looks like this was not well received by the ANC as this call this unrully behaviour.

It is said that the ANC Chief Whip Pemmy Majodina has written to Dirks informing him of the disciplinary charges that have been leveled against him. It is believed that the letter was written on Thursday. 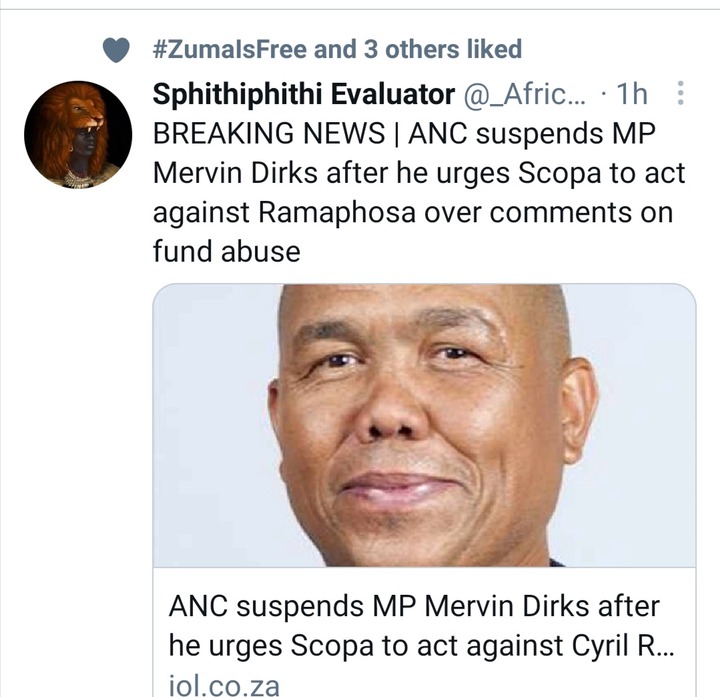 Majodina told him they wanted to take disciplinary action against him for his “unbecoming” behavior as a whip of the party in the caucus. She also said Dirks was suspended with “immediate effect”.

We are being told that the ANC is on the path of renewal and just maybe this is the renewal of it. Taking care of unruly people in the party when they call for their leaders to be held to account. First, it was the CR17 and now he admitted that the party misused state funds. The President owes the nation an explanation.