By Equilibra (self media writer) | 4 months ago 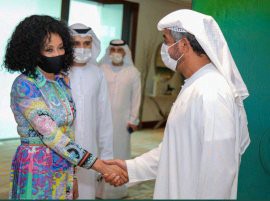 The State Capture Commission is looking for Salim Essa, the elusive dealmaker who is thought to be a Gupta lieutenant. His name has come up several times in the commission's investigation of commercial practices. According to hearsay, During her December trip to Dubai, Lindiwe Sisulu met up with Salim. Goolam, an undercover journalist, has exposed this. Since the day her team inadvertently released and then erased images of Lindiwe Sisulu's Dubai trip, he has been tweeting about it. Salim Essa can be seen in one of the photos, according to Goolam. He further says that after Lindiwe's departure in December, her employees began working for Salim Essa in January 2022.

Salim Essa has benefited greatly from former President Jacob Zuma's "nine squandered years." Witnesses at the panel have described him as the mastermind behind backroom deals and other strategies to position his enterprises and those tied to the Guptas for lucrative government contracts. More information can be found at https://www.news24.com/amp/fin24/economy/missing-salim-essa-the-man-whose-name-is-mired-in-state-capture-web-20210518. 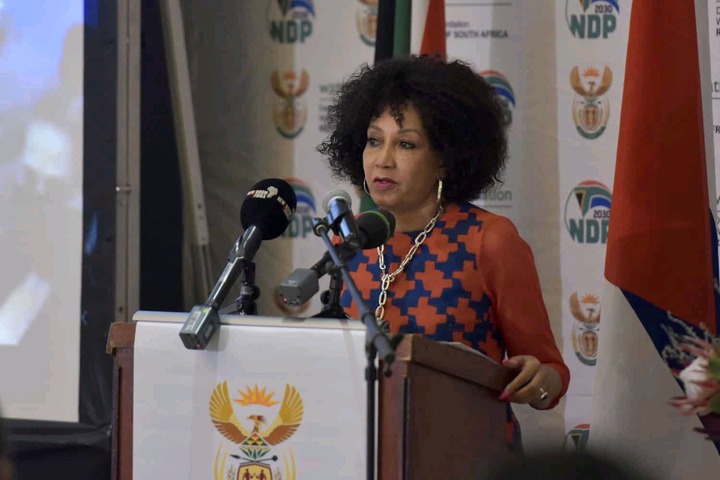 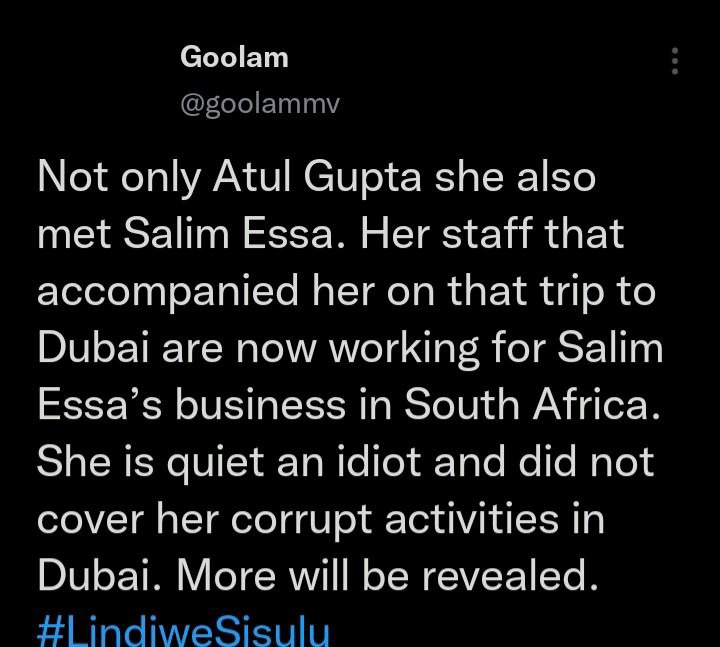 This is the man who sold our country to the Guptas with the help of people like Matshela Koko and Brian Molefe, who are now denying ever meeting him or communicating with him through emails. Lindiwe Sisulu could be up to something if these charges are true. After the terrible Zuma administration, she wants to return us to that place...where the Guptas govern the country behind the scenes and SOEs are hollowed out. The ordinary South Africans, of course, are the victims.

The secrecy surrounding Sisulu's journey to Dubai has been a source of contention. According to a political expert.

"Tourism Minister Lindiwe Sisulu spent four days in Dubai in December, which we may have forgotten about. It was there that she authored, or at least started writing, the piece that ended up disparaging African judges in our courts as "house blacks" with "colonized minds" when it was published a few weeks ago, and which will almost certainly result in her expulsion from the government ",

Meanwhile, the ANC lekgotla was said to be listening to a piece by Tourism Minister and NEC member Lindiwe Sisulu, who made scathing statements against the country's black judges and the Constitution. ANC spokesperson Pule Mabe, on the other hand, says the party will never call a meeting to discuss a single NEC member's comments. Following the party's 110th anniversary earlier this month, Mabe spoke at the first ordinary National Executive Committee. The ANC would not "feed into a media narrative that portrays a quarrel" between Ramaphosa and Sisulu, according to Mabe.

Salim Essa is a South African who is well-known for his ties to the Gupta family, as well as allegations of state capture and other criminal and fraudulent activities.

Content created and supplied by: Equilibra (via Opera News )

EFF FUMES as Officers who are helping Hillary's accused murderers behind the doors are EXPOSED. See