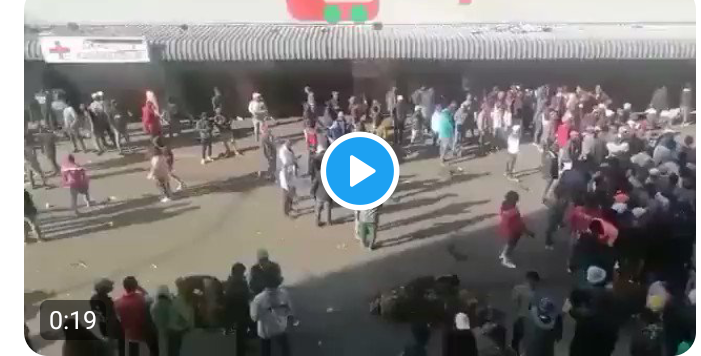 Foreign nationals blocking Customs officials and JMPD From continuing with Clean Up Campaign in Johannesburg CBD (Gauteng Province ) . This Group of Foreign nationals from Different Countries appears to be ready For fight @De Villers Street.

I blame South Africans for doing nothing. Nothing stops us from doing what’s right for our country. My brother, South Africans, think they are woken. In their little minds they think we can create a one Africa with illegal aliens with everyone working and living well. We should be realistic. Immigration laws are there for the betterment of the country. Exactly, we should blame ourselves for not standing up. We are also the ones who vote for @MYANC. And it's getting worse and worse by the week. People don't see we in kak. What happened to teargas that they are quick to use when South Africans protest?

Next thing @SERI_Rights SA will be fronting for them, we are a banana Republic indeed. Many of us saw this coming. They are embolden to fight because they have the numbers, and they know that gaslighting works, and as we speak some NGO will be in court putting in an urgent application for something. This people fail to unite in their countries but are capable of fighting in South Africa through NGO called @SERI_Rights SA, @HelenSuzmanFdn, entitlement of this people they have land in Zimbabwe. If Customs and JMPD fail this fight, We are done as a country!!!

And I blame the same customs and JMPD officials for this situation, they kept requesting bribes from the same foreign, and now they want to arrest them. Customs are a joke. They are the very same people who are failing to control the entry and exit of goods in our country. This time not from ZIM but from the Asian and Western countries. They act as if they dnt know the real criminals. In an old classical JMPD and SAPS historical account. They didn't include this stand-off in their operational planning.

So they (officials) will look that their watches and go back home because their overtime does not cover any extra hours. We will remove ANC if not by vote, by force. If grannies still vote for them in 2024. We will remove them not by vote, It's easy if they would rather not comply then we must call their countries to intervene. However, this must not be limited to black people only Sand ton, Bedfordview etc. must also be visited with the same mentality and force if necessary. I promise this….it is not long ANC is removed by the people. This is not a prophecy, it is a history fact. Their greeted has rendered the country ungovernable, and in times like these. Leaders are forged and rise to the occasion, and it won't be political people. It will be ordinary.