We all know Guptas, but what did Robin Williams Renwick did for SA 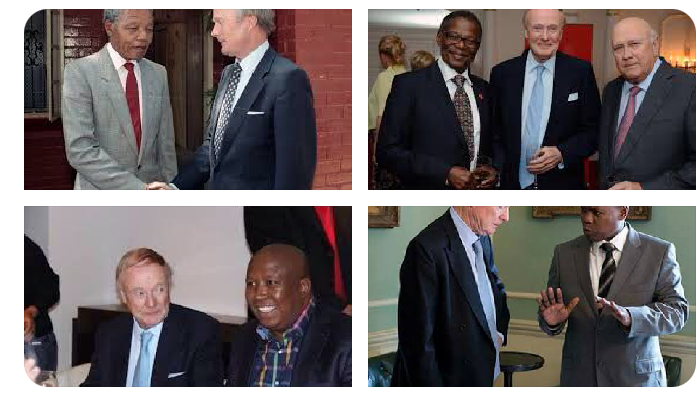 You all know the Gupta's, but animal uRobin William Renwick? So sad and pathetic when people are obsessed with the dead. Renwick was an ambassador in South Africa. He had no choice but to pose for pictures with SA presidents. We are so screwed with idiots. Do something about the future, let the past go. Thanks, 4 letting us know him, but u a bias, why did you not include that pic of him and Zuma. Because Renwick was always anti Zuma and pro-Ramaphosa. He still feels that Ramaphosa should have been President after Nelson Mandela Because he knew Zuma was a looter and sellout. As he was proven correct. Not his kind of looter, and definitely not his type of sellout. He wants looters that will take the loots to the West. Did he also “appoint” ministers? This one appoints presidents. School them Tsepo, school them for free and wake them up. Zuma really pissed him off, There's a video of him complaining about Zuma presidency. I don't have it. Google "Robin Renwick views on JZ presidency" or something along those lines. @LandNoli also shared it some time back. Britain's regime change agent always deployed to Southern Africa, One day when you amassed wealth you will understand why wealthy are in vicinity of politicians, yes he did those who did not comply got the axe. He is so dangerous he influenced the appointment of presidents.

@MzansiFlavour99 used to post some meaningful information about him and SA land politics. Former British ambassador to the USA and South Africa. The media is silent on him and vocal on Gupta. People spew garbage they get from the media, Renwick was UK ambassador to SA when Mandela was released he was also a diplomat in African states, why don't u idiots pick a book for once instead of spending time brainwashing each other w/ hogwash daily, Twitter is not a source of anything except gossip.