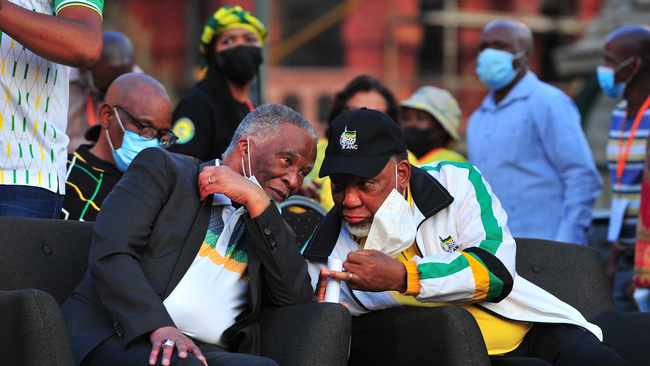 Previous president Thabo Mbeki has required the ANC to return to rudiments yet a main political examiner isn't persuaded by the move.

The legislator last week kept in touch with ANC representative secretary-general Jessie Duarte asserting that the party expected to pull together on its chronicled mission.

"It doesn't have anything to do with him (Mbeki) loving the occupant (President Cyril Ramaphosa), their set of experiences is notable in political circles and I don't think much has been settled," political investigator Lukhona Mnguni told Independent Media yesterday (Sunday).

As per Mnguni, he didn't think Mbeki has any trust in the current president (Ramaphosa).

"What is clear to him is that the ANC is nearly collapse. I don't think Mbeki believes in the current ANC president. His mediation in the ANC is just an inheritance project and nearly, do I bite the dust having attempted or do I kick the bucket having not attempted," he clarified.

Popular government, the main clear champ in the civil decisions

Mnguni said there was a touch of that heritage project engaged with Mbeki's interests.

"Ramaphosa is excessively pre-busy with issues of the state. The president isn't arisen occupied with the ANC," he clarified.

Mnguni said Mbeki's letter showed that there is an administration vacuum in the ANC as Mbeki hosts not been the get-together's leader for a long time since he was expelled in 2007.

"The issues are very veritable (yet) they are pioneering as far as the heritage. ANC older folks don't envision a South Africa that isn't administered by the ANC in the course of their life," he said.

Mnguni likewise cautioned that the ANC was not a special case.

"The chance has been lost and whatever individuals are doing is a type of gloom," he added.

Mbeki said the ANC faces the basic highlight "genuinely and basically pull together on its notable mission".

He said the ANC's noteworthy mission was "to serve individuals of South Africa".

The previous president said the ANC needed to pay genuine, down to earth consideration regarding the four earnest undertakings he referenced in his letter.

He said it was plainly obvious after the nearby government races that the ANC ought to do all things needed in the surveys' fallout to comprise the essential metropolitan state run administrations as fast as could be expected.

Mbeki's letter, dated November 24, asked that the ANC should do the things he proposed.

"What this implies is that the ANC has never existed for itself or basically to propagate its own reality. This implies that during the majority rule period it can't be that it exists simply to get to drive and stay in power," he said.