Durban - There was an alarm in Durban late on Monday when ANC allies raged the setting to disturb the gathering where the appointment of the new city chairman and different authorities was to happen. 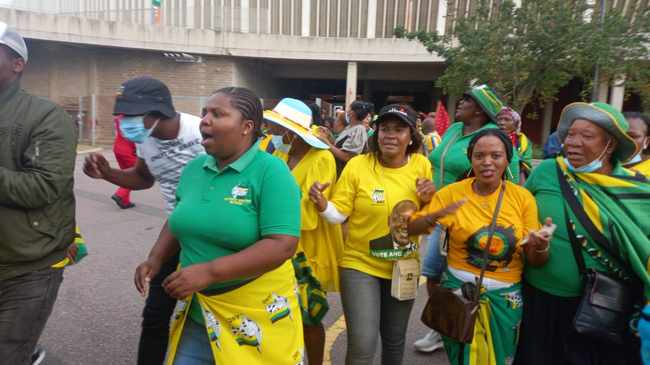 The episode occurred around 6pm and a few ladies councilors inside the setting were heard and considered shouting to be they ran for cover when the brutal allies overturned seats and tables inside the enormous marquee pitched inside the Moses Mabhida arena.

It isn't clear how the allies penetrated security at the principal entryway prior to arriving at the subsequent one, pulling down the steel security fence to enter the scene.

The allies, were who were in ANC formal attire, were at first set up camp external the arena persistently trusting that the democratic will close.

Out of the blue, the allies appeared and they were seen pushing doors to enter the scene. The SAPS, Durban metro police and private and district safety officers didn't attempt to frustrate the security break.

It was just when they raged the setting and were withdrawing that the security powers seemed to act, cordoning off the scene and amplifying security.

At the point when the group raged the setting, there was a little gathering of EFF allies who walked and progressed to the scene with them. EFF commissars, Thabani Miya and Vukani Ndlovu controlled them and told them not to join the conflict and they kept the order and returned.

Inside the scene, driven by a tall and very much fabricated man, the ANC allies tossed over tables and seats while walking to the platform where recently chose speaker, Thabani Nyawose was remaining with others.

Before the security break which seemed to have been designed to fall the sitting, there was an issue of force disappointment, driving the sitting to briefly defer.

Resistance councilors asserted that the power disappointment was designed to save the ANC from losing the mayoral seat as obviously DA's Nicole Graham was set to take on Mxolisi Kaunda of the ANC for the city hall leader position.