So, SAFTU has elected a new leadership. this leadership includes Zwelinzima Vavi.

NUMSA is by far rhetoric biggest component of SAFTU and it's most influential leader is Irvin Jim who has been long time comrade of Zwelinzima Vavi, their friendship collapsed owing to their differences which some say are ideological, which I don't believe I suspect it's more about monies, workers' monies remember the two have been accused of either abusing the workers' credit cards or using the workers for a birthday party. Now, on the basis of NUMSA's strength, Irvin Jim had for the longest of times threatened to collapse SAFTU, the federation including it's congresses of this week, if HE, (Irvin Jim and not NUMSA) doesn't his way.

It now turns out that the federation has successfully held it's elections which includes Zwelinzima Vavi, who in NUMSA could have actually voted Zwelinzima Vavi into office is it possible that Irvin Jim could be losing his grip on NUMSA, given it's massive influence on SAFTU even more intriguing is what if Irvin Jim had made good the threat of walking out of congress should his demands, through NUMSA, were not met, who from his union would have followed him? Could it be that the members of NUMSA have developed that sense of independent, thinking which had been so illusive within the Trade Union Movement for so long? 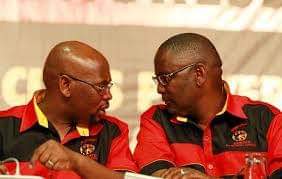