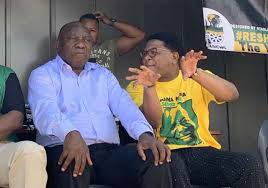 Mbalula pummels claims that Prasa's new CEO is 'Not too old' to take up post,

'GroundUp' reports that Zolani Matthews' arrangement as Prasa's new CEO is in break of the rail organization's strategies on retirement.

Transport Minister Fikile Mbalula has pummeled claims that the recently selected (CEO) of the Passenger Rail Agency of South Africa (Prasa), Zolani Matthews, is excessively old for the position. The priest says these charges are shocking and unwarranted.

This followed a report on Friday by news organization GroundUp that Matthews doesn't fit the bill for the post because of Prasa's own approaches, which express that representatives ought to resign at 63 years. Matthews is 64 years of age.

"This is an unwarranted creation which has been coursing broadly via web-based media stages," Mbalula said in a proclamation.

The minister said as far as fair treatment, following Cabinet's endorsement of the arrangement of the new Prasa CEO, the office's board was required to guarantee all essential cycles are continued in influencing Matthews' arrangement.

"These incorporate guaranteeing necessities of Prasa arrangements are clung to, getting an exceptional status, and revelation of monetary interests," Mbalula said.

"When the board has closed the contracting cycle, we are anticipating working with Mr Matthews once he accepts his obligations."

Matthews was declared as the new CEO of Prasa last Saturday.

The rail office has not had a CEO since the takeoff of Lucky Montana in 2015. From that point forward, Prasa has had 10 acting CEOs in six years.

Matthews' arrangement 'totally above board'

In the mean time, in a different proclamation gave by Prasa's load up on Friday, the organization said it was overwhelmed by reports that Matthews' arrangement is in penetrate of the parastatal's approaches.

"Such reports are, best case scenario, uninformed and even from a pessimistic standpoint malignant," the board said.

The assertion said on Monday Prasa's board director will address the media in Cape Town on the cycles continued in the work of the new CEO.

"The cycle was totally above board and was guided by significant approaches appropriate to Prasa."