The ANC is against Zuma's second arrest, will he be arrested?

By Celebrityscoop (self media writer) | 8 months ago 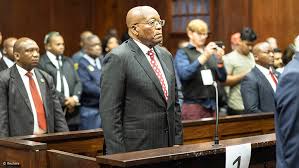 The ANC KwaZulu-Natal secretary Mdumiseni Ntuli said that they took a decision to ask the NEC to allow them to join former president Jacob Zuma's bid to appeal his medical parole ruling. Ntuli revealed this decision was taken because they don't want to see a repeat of the unrest and looting that followed after Zuma's arrest in July.

KwaZulu-Natal ANC said that it could not sit on the sidelines while there were challenges emanating from Zuma's legal battles.

The former president was arrested in July for contempt of court after ignoring a Constitutional Court ruling that he should appear before the State Capture Commission of Inquiry and was released on medical parole on September after serving two months of his 15-months prison sentence.

The Provincial structure said that it wanted the party's National Executive Committee (NEC) to allow them to join Zuma's bid to appeal the high court ruling which set aside the decision to have Zuma released on medical parole.